Honda 2Wheelers India has announced a new Indian team that will compete in the 2018 Asia Road Racing Championship. The newly formed IDEMITSU Honda Racing India team has been put together with Honda's aim of developing an iconic Indian rider in the two-wheeler racing space. The team, which will be run by T Pro Ten10 Racing, has two Indian riders - Rajiv Sethu and Anish D Shetty. While 2018 is Sethu's second year in the ARRC's Asia Production 250cc class, Shetty is an ARRC rookie. 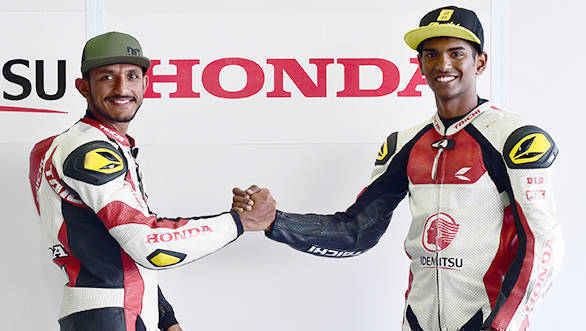 Anish D. Shetty and Rajiv Sethu will compete in the Asia Production 250 class of the 2018 ARRC

Sethu and Shetty will compete, as stated earlier, in the Asia Production 250cc class, where they will be up against 23 other Asian riders. The team, however, is also fielding a third rider, 23-year old Taiga Hada. The Japanese rider, who finished third overall in the SuperSports 600cc class in the 2017 FIM ARRC season, will compete in the same class this year too.

Prabhu Nagaraj, vice president  customer service, Honda Motorcycle & Scooter India Pvt. Ltd. said, "Honda India is making gradual and consistent progress in motorsport and our boys going international is great for the sport. With the ARRC returning to India later this year, this will be another great opportunity for the riders as well as the motorsport fans in India."

Speaking of the push to get an Indian rider to the forefront of international motorsport, Minoru Kato, president and CEO, Honda Motorcycle & Scooter India Pvt. Ltd. said ahead of the team's first outing in the ARRC this weekend, "Honda 2Wheelers India is proud to announce that for the first time, an Indian team will be participating solo in the 23rd season of Asia Road Racing Championship (ARRC) 2018. It is our next step towards realizing the dream to develop iconic Indian riders for both only national but more so international racing championships." He also added that over the course of 2018, Honda would announce new racing and riding programmes in India.

Delighted to be part of the ARRC for the second time, Rajiv Sethu stated, "This is my second year at the ARRC, I had an amazing debut and learnings last year. By providing me with this global platform, Honda 2Wheelers has given me wings to achieve my dream of becoming an international Indian motorsport rider. Taking learnings from 2017 season, I have worked diligently this year. I am very excited to be a part of the first Indian team and aim to deliver my best this year for my team and my country."

Meanwhile, Anish D Shetty who makes his debut in the ARRC said, "I am elated and honored to be a part of the historical first all Indian team at the 23rd season of ARRC. For any Indian racer, getting global exposure is a big opportunity. Honda 2Wheelers India has made my dream come true. I look forward to ride and learn from the most experienced racers in the world. 2018 season for me is all about improving my riding and presence in international races. This is my first exposure in ARRC and it's a big deal for me. I will do my best to make my team and country proud."

The first round of the 2018 ARRC has recently concluded at the Chang International Circuit at Buriram in Thailand. Rajiv Sethu finished 18th in both races, while Anish D Shetty finished 20th in Race 2, but unfortunately didn't finish the first race.

The team now heads to Adelaide for Round 2 of the championship between 19 and 22 April.