Aston Martin is all set to invest 20 million pounds to expand its manufacturing facilities in Gaydon, England. Aston Martin says this step comes in to prepare its facilities for the next generation of new sports cars.

The expansion includes an area for creation of a new chassis and pilot build facility, increasing the total area by 10,000 square metres. Also, this step will generate 250 new jobs in the engineering, manufacturing and commercial sectors. The expansion work would be completed by 2015. 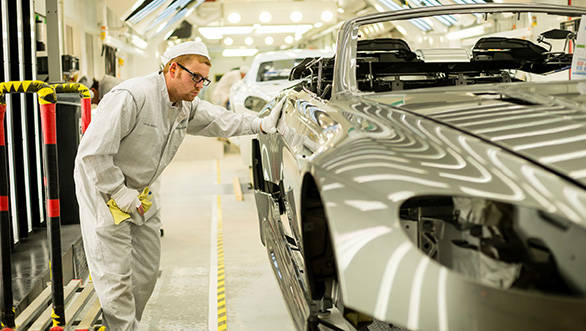 Aston Martin had sold 37.5 per cent of its stakes to an Italian firm Inves tIndustrial in 2012. Aston had said that it would use £100m for research and development every year. Later Aston sold five per cent of its non-voting share to Mercedes-Benz AMG in exchange for twin-turbo V8 technology from AMG and electrical and electronic architecture from Mercedes. Ford had sold off Aston Martin in 2007 but Astons continued to come with engines from Ford.

Astons have always been about their engines and the dynamics. They may not be the best at the moment but these have been the aspects that set an Aston apart. With new chassis and brand new engines from AMG, the guys at Gaydon need to come up with a car that has pretty big shoes to fill.

Dubai 8 June 2014: Work is under way on what is one of the most significant and exciting developments at the Aston Martin factory and global HQ for several years, as the business prepares to grow substantially its manufacturing facilities and workforce.

Preparations are well advanced on an extension to the British luxury sports car maker's state-of-the-art manufacturing facilities in Gaydon, Warwickshire, as the business gears up for its next generation of new sports cars.

Alongside the building work, Aston Martin is also embarking on a recruitment drive with around 250 news jobs in engineering, manufacturing and commercial functions being created over the course of the next few months.

The specifics of the ambitious development plan at Gaydon include the creation of a new chassis and pilot build facility, new offices, and an extension of the parts and logistics storage area. The new facilities will cover an extra 10,000 square metres and the major development work is due to be completed in 2015.