Round 2 of the Audi R8 LMS Cup in South Korea was a mixed bag for Aditya Patel. The Indian tintop racing driver had qualified for the first race in third place. When the five red lights went out, Aditya got off to a good start, but another driver hit his R8 LMS from behind, which meant that Aditya ended up dropping to eighteenth position. Never one to give up, though, Patel worked his way up the track and found himself sixth on track, which is where he ended the race. However, when two other drivers were penalised, Patel was elevated to fourth place. 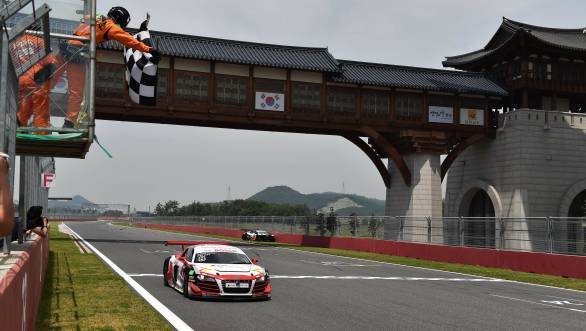 In the second race, Patel started sixth. It didn't take him too long to get to second on track, behind race leader Jean-Karl Vernay. And while Vernay was busy defending his position, it allowed the drivers behind, Kyong Ouk You and Rahel Frey to catch up. The battle really heated up at this point.

When Vernay was slapped with a penalty for an incident that took place earlier in the race, Frey, who had started 15th, ended up winning the race, followed by Ouk You and Patel.
"It was not the easiest weekend for me. The Korea International Circuit is probably one of the toughest circuits to learn, with almost twenty corners over a lap distance. Unfortunately, due to less practice time, I was definitely on the back foot going into the weekend. But in the end, it's good to come away with a podium finish and many good points. The first race was a bit of a nightmare after being punted out on the start, but I really did enjoy making my way back up the field! I'd like to thank Audi India, JK Tyres and Jubilant Motorworks for all their support as well," said Aditya Patel after the race.

After two rounds, Rahel Frey leads the championship standings with 44 points, with Patel second with 42 points and Thomas Fjordbach, with 36 points, third.