The closest to launch scooter Hero showed at the Auto Expo was the Hero Dash which is powered by a 8.4PS 110cc engine, the same that powers its Maestro scooter. The Dash, then, is the sporty-masculine end of Hero's 110cc scooter range. As usual, Hero have loaded it with convenience features like a fuel lid that opens with the ignition key slot, ana-digi meters, LED tail light, side stand indicator, its new integrated braking system (IBS), USB charger, illuminated under-seat storage and a service due indicator. 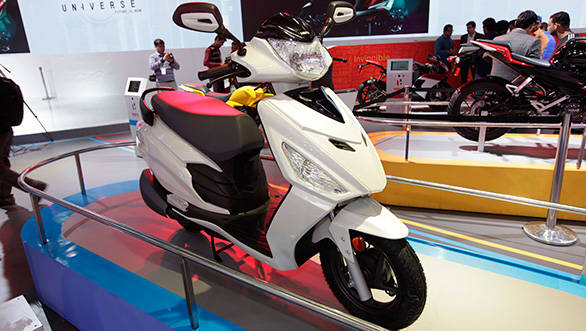 The Dash is expected to shore up the volumes for Hero in the scooter market where Hero intends to be the market leader. Hero already averages over 60,000 units a month and is raising production to 75,000 units a month. The Hero Dash will be launched in India in the first half of next fiscal