With manufacturers headed in the direction of self driven cars, the world is looking at a future where personal travel no longer requires any human intervention. However, the recent advance shows that trucks have also joined the fray. Around a dozen or so trucks from various manufacturers like Volvo and Daimler have completed a week of travelling across Europe, the first of many major exercises to come.  A 15 per cent savings in fuel costs was also recorded due to reduced wind resistance, according to research firm TNO. 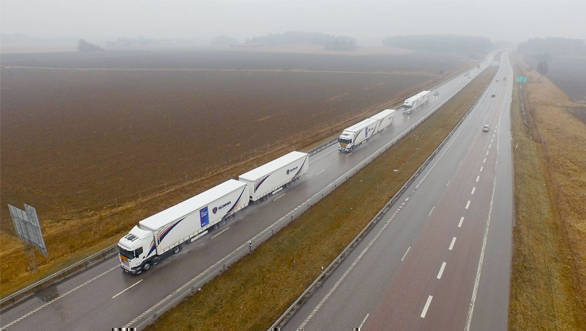 The exercise, called the European Truck Platooning Challenge, was funded by the Dutch government with the purpose of creating a fleet of self driven trucks which are commercially viable. Platooning is a formation in which trucks are connected to each other via Wi-Fi, maintaining a short distance between consecutive trucks, akin to travelling in packs. Out of all the trucks, the set by Scania, a Volkswagen subsidiary, traveled the longest journey, at around 2,000km. The advantages of this system over human-based trucking are significant. Humans tend to make mistakes, especially when they are tired. Decision making is also influenced by the drivers state of mind. Computers, on the other hand, deliver consistently. However, the possibilities of a technical glitch cannot be ruled out and eliminating the potential of such issues cropping up, is the challenge.
While the entire setup seems technically sound, they still need various governments to sign off on permissions. The general plan is to set things into motion five years from now once the roadmap has been approved.