The new Bajaj Pulsar RS 200 will be launched in India on March 26, 2015. A highly awaited motorcycle, it is expected to set new performance benchmarks in the sub-Rs 1.50 lakh sportsbike segment. We have been often treated to spy shots on the interweb on the Pulsar RS 200. However, this is the first time ever that Bajaj has officially teased the motorcycle via a video. Apart from the silhouette which doesn't change much from the SS there are a lot of previously unknown details which can be gleaned from this video. Here's what you should know about the Bajaj Pulsar RS 200. 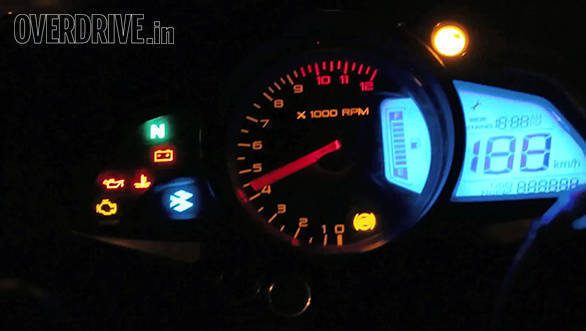 This motorcycle is a feature loaded one. It has all the bells and whistles from the current 150cc sportsbikes and then some. There is a digital clock, low battery indicator, coolant temperature indicator, engine check light, low oil indicator, side stand indicator, service due indicator, twin trip meters and a fuel reserve light that also doubles up as a rev-limiter indicator. Interestingly though we also spotted an ABS malfunction light which is a strong indicator that this bike could come with ABS. That is one exhaustive list and we haven't even started on things which are not apparent on the meter. That would be the twin projector head lamps with daytime running lamps, alloy triple clamp, monoshock suspension, tubeless tyres, split seats and LED tail lamp. This bike is kitted to the gills.

This bit is still not concrete though the popular choice of expectations is listed. The Bajaj Pulsar RS 200 will have the same engine from the 200NS naked street motorcycle. This engine in the NS makes 23.5PS and 18.3Nm  but since the video shows a motorcycle with an engine check light, it is an indication that the RS 200 gets fuel injection as well. In Turkey where the motorcycle will be sold, the power specs read as 24.4PS/18.6Nm, with the engine mated to a 6-speed gearbox. Bajaj claims that this is the 'Fastest Pulsar' made to date and that could be down to both the improved aerodynamics as well as the possible increase in power. Given those details we expect a top speed of about 145kmph considering that the NS does a genuine 130kmph (Bajaj claims 136kmph).

The most important question perhaps. Given the cost of the extra features and all that plastic we expect the Bajaj Pulsar RS 200 to cost around Rs 20,000-30,000 more than the 200NS. This means an ex-showroom price of around Rs 1.30 lakh. At this price point, it competes with the very capable Yamaha R15 and the Honda CBR150R, but potentially offers more performance as well as features than both. Definitely a battle worth waiting for.

We will be riding the motorcycle soon. Watch this space.