Bajaj has pulled a massive surprise at the 2014 Auto Expo. While we expected them to show the faired version of the Bajaj Pulsar 200NS, the company has gone ahead and shown not one but two new Pulsars, both with the larger 375cc engine.

The first is the one we knew about - the faired SS400 (see below), where SS stands for Supersports. And just like we visualised,the bike sports an overtly aggressive and rather fussy design. 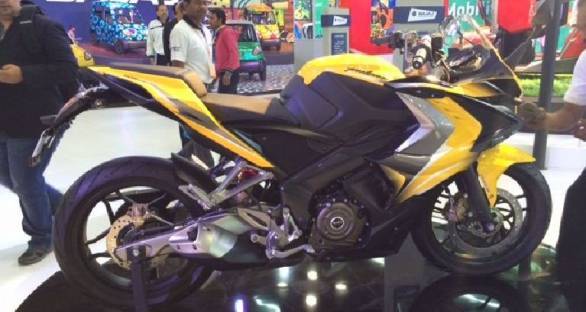 The front fairing is identical to what we've been seeing on test mules with a pair of small recessed headlamps. The fairing features many slashes and even a faux air intake ahead of the tank. The tank it self is quite large. The rear features a sport bike style split seat while the flashy tail lamp is mounted on the rear mudguard. The bike features raised clip on handle bars and doesn't seem to have as exaggerated a riding position as the design suggests.

Chassis-wise the SS400 features a different frame to the trellis on the KTM 390 Duke this bike is based on. The engine is also based on the KTM's but has been considerably reworked and features Bajaj's triple spark technology. The company has remained tight lipped on any engine specs so far. 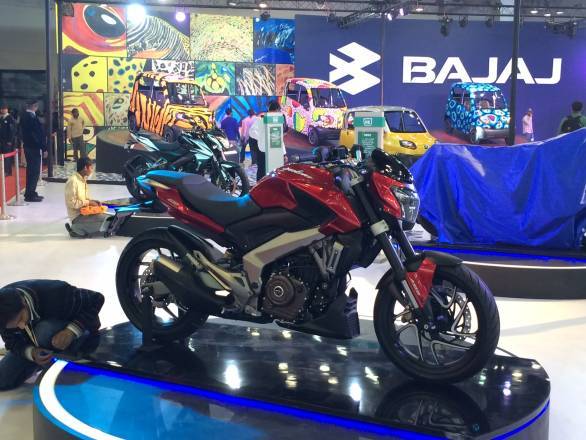 The CS400 (above) meanwhile retains the overall silhouette of the 200NS but looks considerably beefier in every aspect. The bike features a new headlamp and gets all digital gauges that sit on top of a conventional handle bar.

The bike also features a unique digital speedo and gear indicator mounted on the tank. The design is rounded off by a thick rear end with a butch looking end can mounted along the right side of the bike.

One difference between the SS and CS is that the faired bike runs Metzeler tyres like the KTM 390 Duke but the street bike runs a new version of the MRF Revz seen on the smaller 200 Duke.

In addition to the bikes Bajaj showcased the RE60 people carrier. The RE60 features a 216cc, liquid-cooled 4-valve triple spark engine. Fuelling is handled by fuel injection while it features a 5-speed manual gearbox. It will be offered in petrol, CNG or LPG options. Bajaj claims 37kmpl of fuel efficiency.

Bajaj made a third and equally big surprise with the introduction of its UCAR brand. This is essentially a personalised version of the people carrying RE60. It's in the early concept stage now and features gull wing doors. While the RE60 is aimed at replacing the rickshaw with safer, closed transportation, the UCAR brand is essentially aimed at making affordable personal transport available to the masses.