I posted a video of me riding OVERDRIVE's long term Multistrada out on a narrow forest road just north of Mumbai. And someone commented that I was going too slow for a 160PS, 1,200cc motorcycle. Made me wonder how would they know - they weren't there. But it also underlines something I believe is vital to riding safely and swiftly under all circumstances. And that is your sense of speed. Not what the speedo is saying, mind you, what your body and mind is telling about your speed. 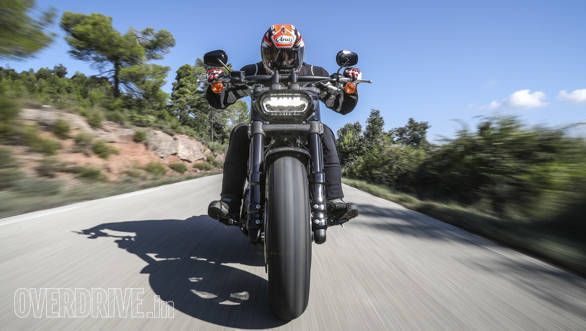 In the video I posted, I was on a narrow road that I was unfamiliar with. I can sometimes use the navigation display to get a sense of what's coming but in the bright sun, that was not working either. Which meant that whenever I opened the throttle, my brain said I was going to fast. I've learnt to always pay heed to that sense of speed. So the video looks slow. But I know that the risk and the consequences escalate very very rapidly on a narrow road, lined with trees and with no run-off anywhere.

Why is this important? Because the narrowness of the road, the unfamiliarity of the layout, the trees and no escape 'places' if you run off the road, these are all things that give your brain the information it needs to decide what the right speed is. So how do you know if you're riding too fast? You'll feel a frisson of excitement that says, "Wow, I'm fast today!" Normally you celebrate this feeling, but in time you should learn that it's a warning not a pat on your back.

What does riding right feel like? "Wow, look at that lake in the distance!" Riding at the right speed allows your brain a little bit of room to take in more of the world around you. You feel well-adjusted, calm and in control. That is not a sign to speed up, it's a sign to hold station and keep at it.

The sense of speed isn't a constant though. As your ability to see changes (say with age, or when you get glasses), as your experience on the motorcycle increases, after a weekend at riding school or when you get back on the bike after a long break, that sense changes. The brain has to re-learn or re-calibrate how you should respond to each set of real world parameters, including how the motorcycle feels to you.

Like many things on motorcycles, your sense of speed, so vital to both progress and speed, is a practiced skill. You can teach yourself to be calm at higher speeds and increase your safety margin. And you can also teach yourself to recognise the signs that you're going too fast earlier and earlier.

What is too slow on a 160PS motorcycle? You don't need a speedometer for that. Your brain will tell you.