BMW has released a small teaser video of its upcoming iX3 concept all-electric crossover. As announced in March, the car will debut at the Beijing auto show on April 26. The video shows a new interpretation of the Munich-based brand's trademark kidney grille.
Not much is known about the iX3 other than that it is a crossover and will be launched in 2020. BMW is planning a big push into electric vehicles, like Mercedes-Benz, and plans on having 25 electrified cars on sale by 2025. These will likely include SUVs from iX1 to the iX9, given that it has trademarked these names last year, and the i4 sedan shown some time ago. 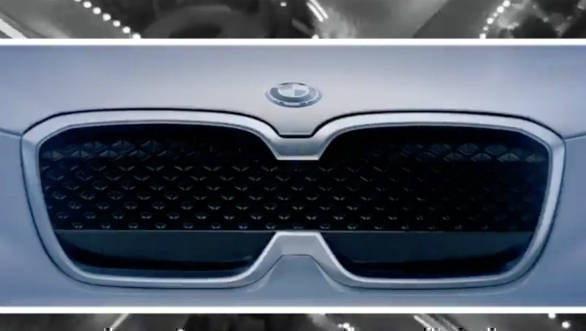 The iX3 will be based on the underpinnings of the new X3 but may have the electrical components from the i4. This means an electric range of 550 to 700km. The design language will also differ from its mainstream range to better differentiate its electric line-up. The iX3 will compete with the Jaguar I-Pace, Audi e-Tron and the upcoming Mercedes-Benz EQ C.
The iX3 will be BMW's' first major shot at the full EV market and the German car-maker will use this car to reassert itself in the face of what is probably the biggest disruption ever seen in the car industry worldwide. BMW will use the iX3 to set itself up to jump right in at the thick end of the electric car market and have all its bases covered.