BMW India has recently hit a milestone by rolling out its 50,000th car from its Chennai plant. The car that marked this milestone for BMW is the all-new 7 Series which was showcased at the 2016 Auto Expo in Delhi. 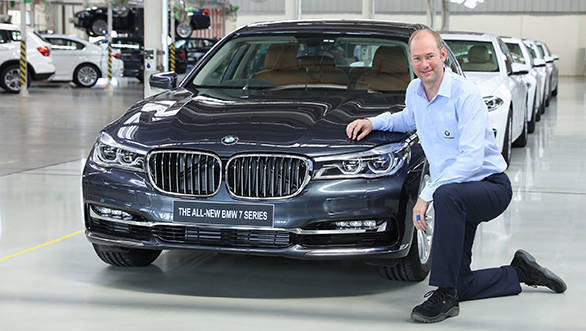 The plant has been active since March 29, 2007 and now produces eight cars locally on two assembly lines. The locally produced cars at the Chennai plant include the BMW 1 Series, 3 Series, 3 Series Gran Turismo, 5 Series, 7 Series, X1, X3 and X5. In an effort to further the "Make in India" initiative, BMW plans to increase the localization of the Chennai plant by up to 50 per cent.

"It is with great pride that we are rolling out the 50,000th car locally produced at BMW Plant Chennai. Each and every BMW that is locally produced is of the same international standards as anywhere else in the world and brings a smile on the faces of our customers. Highly skilled employees, advanced manufacturing processes along with state-of-the-art machinery and technology provide all the necessary ingredients to achieve these tough standards. We are proud of this achievement and look forward to many such milestones in the future," said Jochen Stallkamp, managing director, BMW Plant Chennai.