Why is automotive safety technology relevant for Bosch?

Accident statistics all over the world paint a grim picture of the rising incidence of mishaps on the road. But it looks like Bosch have unearthed some encouraging reports regarding the reduction in the number of motorcycling accidents, thanks to ABS, citing the German In-Depth Accident Study (GIDAS) as their source. One of the intriguing points claimed to be revealed through the study is that nearly two-thirds of the riding accidents that occur in bends are caused due to rider error. These, Bosch believe, can be combatted by making use of the MSC (Motorcycle Stability Control) that has been developed by them. 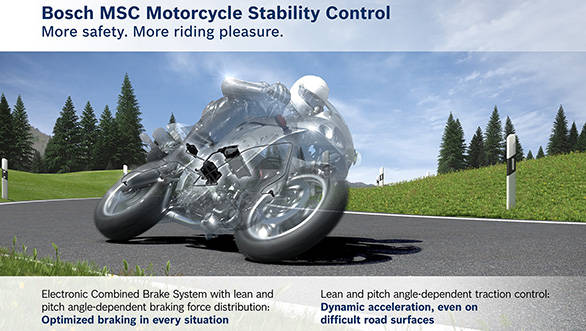 Motorcycle Stability Control is a system that records parameters such as lean angles and accordingly adjusts the ABS support and traction control while riding. In short, the conditions of the bike are tailored to the needs of the road and the riding speed, dynamically. This is claimed to reduce the chances of accidents or remove the chances of fatality or serious injury, if the accident is inevitable. In a statement from Gerhard Steiger, president of the Bosch Chassis Systems Control division, it has been likened to ESP in cars. He says, "MSC currently offers the best possible support, whether braking or accelerating, and even when the rider is leaning over at a steep angle."

The system is also claimed to calculate tilt rate and linear acceleration to predict which wheel (rear or front) is liable to lose contact with the ground and deploys corrective measures.

Where has MSC been employed previously?

The KTM 1190 Adventure and Adventure R were the first motorcycles that incorporated the MSC and that is when the technology first went into series production in 2013.

How does MSC compare to the ABS and is it relevant in India?

ABS for two-wheelers has been made compulsory in the European market. The new regulation is effective for all vehicles registered from 2017 onwards. Though not compulsory in India, ABS comes as standard in a lot of two-wheelers such as the Bajaj Pulsar SS400 and the Triumph Street Triple. Steiger again cited the findings of the GIDAS to substantiate the merits of ABS as an effective accident prevention measure, stating that it can help avoid " a quarter of all motorcycle accidents resulting in death or injury."

For emerging (read low cost) markets such as ours, Bosch has introduced ABS 9 light which can control the front wheel using a single hydraulic brake channel. Anti-lock protection for both front and rear wheels can be provided with two channels. Unlike the MSC which can predict which wheel will lift off the ground, the ABS can only predict when the rear wheel lifts off. And unlike the advanced methods used in MSC involving a lean-angle sensor, there is a basic pressure sensor in ABS 9 that helps detect the rear wheel losing contact with the ground. And again, unlike in the MSC where the technology assists and controls braking, in the ABS 9 the rider has to at least apply one of the brakes in order to activate the second one.

In the harsh monsoons that our country experiences every year, this technology might prove to be greatly effective in preventing horrific incidents on the road. Strangely though, according to Bosch, good weather increases the chances of accidents. It seems the caution that motorcyclists exercise during bad weather actually helps. And April and May have been quoted as the months of maximum damage - the sun, apparently inspires over-confidence.