The opening round of the 2018 BRDC British F3 championship at Oulton Park brought with it mixed luck for the two Indian drivers competing in the championship. While Krishnaraaj Mahadik, who competes for the Double R Racing outfit, managed to end the qualifying session in fourth place, it was tougher for Lanan Racing's Kush Maini who, after an excursion during the session led to a cracked front wing, ended up further down the order. 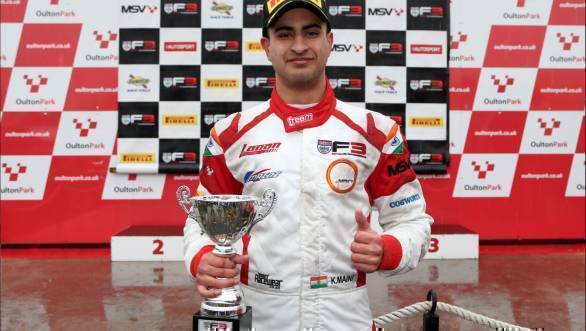 The first race of the season saw Mahadik move up to P3 during the race, after which an incident led to him losing positions and ending up fifth. Things weren't particularly good for Maini either, who finished a tough race in ninth position. Victory in the race went to Double R's Linus Lundqvist, who finished ahead of Carlin's Nicolai Kjaergaard, and the heroic Billy Monger who also competes for Carlin.

Race 2 turned out better for Maini, who managed to end the race fifth. However, it was bad luck for Mahadik who started the race 12th, and was running in fourth position when he lost control of his car in an incident that led to damage and a DNF. The race win went to Fortec's Manuel Maldonado, followed by team-mate Tristan Charpentier and Douglas Racing's Jamie Chadwick.

It was Race 3 that was going to be the high point of the weekend for Maini, who managed to make it to the podium taking third place after a hard race on a wet track, which given his lack of experience in inclement weather, was quite a challenge. Finishing ahead of him was Kjaergaard who won the race, with Fortec's Tom Gamble in second place. Billy Monger managed to make it to eighth place, followed home by Mahadik who finished ninth.

Round 2 of the BRDC British F3 Championship will take place at Rockingham on April 28 and 29.