Arjun Maini won his first race in the British Formula 4 Championship at Snetterton, leading from lights to flag. The Indian driver started the race on pole and led every one of the nine laps of the race, finishing ahead of Douglas Motorsport's Diego Menchaca. Third place went to Maini's Lanan Racing team-mate George Russell. 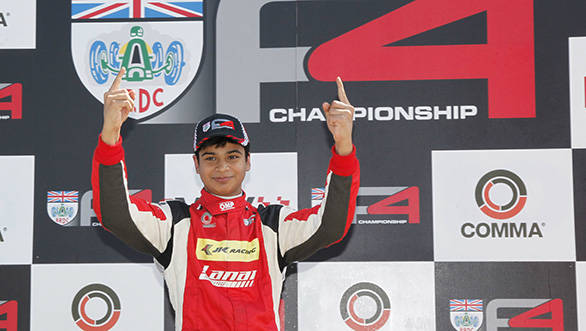 It wasn't an entirely easy race for Arjun though. While he had managed to build a lead over the first few laps of the race, that lead was negated when the Safety Car came out due to a crash between Nicolas Beer and Sennan Fielding. This meant four laps of the race were run under the Safety Car, which left Arjun with 4 laps to put some distance between himself and Menchaca. He finished 3.171 seconds ahead of his nearest rival. While the race ought to have been a 10-lap affair, it was run to time and hence concluded within 9 laps.

Maini finished Race 1 eighth and was just off the podium in Race 3. He is currently fourth in the championship with 179 points, 37 points adrift of championship leader George Russell.

The next round of the BRDC F4 championship will be held on July 18 and 19 at Oulton Park.