Rendering of upcoming automobiles gives a fair idea (in most of the cases) of what to expect in terms of design and features. Like in this case, a Bugatti Chiron Grand Sport roadster. Something that might never see the light of the day. But then it doesn't harm anyone to imagine what a 1,500PS making open top beast of an automobile would look like. 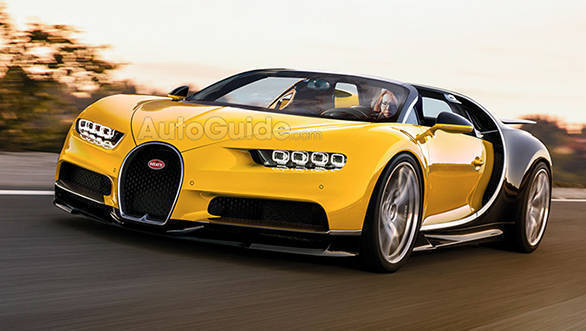 The targa roof design on the Bugatti Grand Sport roadster should make it much more appealing than the regular version (Rendered image: Autoguide.com)

As seen from the images, the already exotic Bugatti Chiron has been given a targa roof design , reminiscent of the Grand Sport Veyron. To make this rendering into a reality, structural changes have to be made to the car's frame in addition to increasing its torsional resistance. Also, making a neat provision at the rear of the car to accommodate the targa roof. However, this might not go beyond the rendering as Bugatti marketing boss Stefan Brungs maintains a "no roadster or convertible" stand on the Chiron.

The Chiron derives all of its majestic force from a one of its kind 8.0-litre, quad-turbo, 16-cylinder W-configuration engine which puts out a whopping 1,500PS and colossal 1,600Nm of torque. The power is sent to all four wheels via a 7-speed dual clutch automatic transmission. The Chiron reaches 100kmph in around 2.4 seconds. The top speed, electronically limited of course, is 420kmph. With the limiter removed, the Chiron is claimed to be able to hit 463kmph.

Bugatti, as of now, has limited the production of the Chiron to 500 units, more than half of which have been sold. However, we expect more Chiron variants to follow with various suffixes, as had been the case with its predecessor, the Veyron.