Bullet train for Mumbai-Ahmedabad route to have 350kmph top speed

A speed which even most supercars fail to reach these days, will be surpassed by a bullet train - 350kmph. India is all set to get its first bullet train with the first route chalked out between Mumbai-Ahmedabad. Prime Minister of India, Narendra Modi, laid out the foundation stone for the new bullet train project. He was flanked by Japanese Prime Minister Shinzo Abe. The Indian PM had already visited Japan multiple times to discuss about this project. 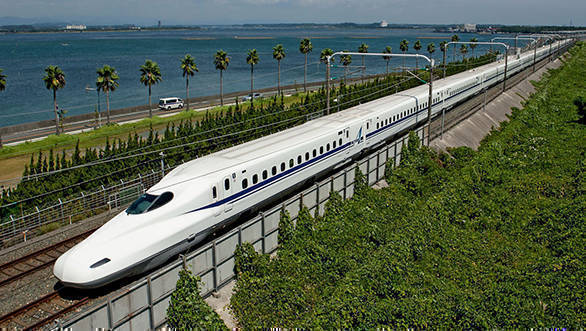 Reports say that the trains can run at an average speed of 320kmph but the speed can be increased by 30kmph more if required. The bullet train will cover the 531km Mumbai-Ahmedabad route in just  approximately three hours. This is if the train stops at 10 stations on its route. However, if the number of stations that it stops at is brought down to two, then an hour can be shaved off the total time.  A 21-km-long tunnel is expected to be built between Boisar and Bandra Kurla Compex (BKC). A 7km long stretch between this will be under the sea.

The government will be dividing the Mumbai-Ahmedabad bullet train coaches into economy and executive - the fare will be comparable to that of the tier-II of the Rajdhani. The Mumbai-Ahmedabad bullet train project will cost Rs 1.08 lakh crore and the first train will ply on this route in 2022. Once the bullet train starts, it will have halts at Thane, Virar, Boisar, Vapi, Bilimora, Surat, Bharuch, Vadodara, Anand and Sabarmati. The total seating capacity will be 750 passengers in 10 coaches. A 20 hour run, the bullet train need maintenance work of four hours. While initially 35 bullet trains will be operational on this route, the number is expected to quadruple by 2053.