Can sales of scooters overtake that of motorcycles in India?

Scooters used to dominate Indian roads a few decades ago. In 1996, they fell in share but still occupied almost half of our two-wheeler sales while motorcycles stood at about 30 per cent. By 2006, the reversal was dramatic. We became a market that bought 87 per cent motorcycles and 12 per cent scooters. Since then, the automatic scooter has been growing as fast as 40 per cent year on year and has now hit about 25 per cent share in the Indian two-wheeler market. If scooters grow at this rate and motorcycles stay at a growth rate of 6 to 10 per cent, then scooters could equal motorcycles once more, right? 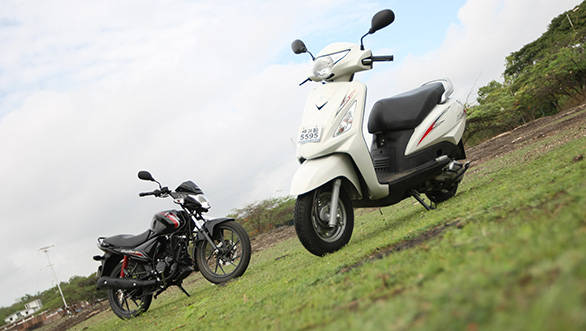 The industry seems to agree that the current upswing in scooters will bring them to about 30 per cent in four or five years and 35 to 40 per cent of the market is, further, possible. Scooters are already at 35 per cent or so in volume in the 'urbanised' states  Karnataka, Maharashtra and Gujarat. Urbanised implies good urban road infrastructure, a significant number of working women etc. The more states that follow this trend, the more scooters will benefit. Women as a market segment are still considered as less than significant players in two-wheelers and the second reasonable assumption is that women entering the workplace will prefer scooters, boosting sales, though not at the expense of motorcycles. Further, scooters are India-friendly. You can carry stuff, they are easy to ride and in the family context, almost everyone can ride one. Finally, the fuel efficiency gap between scooters and motorcycles has been narrowing. In fact, even outside the big cities people have taken to scooters because they work well for their use pattern  some load and short trips.

It is harder to predict what happens once scooters cross 36-38 per cent, say in 2020. Their growth rate will slow and it'd be foolish to assume motorcycles will not bounce back. Many believe the equilibrium point is hard to call but could be at about the 40-45 per cent scooters overall, though accuracy is impossible until scooters actually hit 35 per cent at least.

We believe improving urban infrastructure and other factors will favour scooters. While many refuse to stick their necks out and make a call - not one person we spoke to said it is impossible - we believe that India is well on its way to being a market where scooters and motorcycles have equal volumes. The equilibrium will be around the parity mark though it is going to take another 15-20 years.