The first ever international Cartier Concours d'Elegance event was organized in India in 2008 in Mumbai. The subsequent three editions took place in either Delhi or Mumbai and the last one was held in Hyderabad in 2017. The sixth edition of this eagerly awaited event for vintage and classic machines will happen in the historic and colourful city of Jaipur on February 23 -24, 2019. 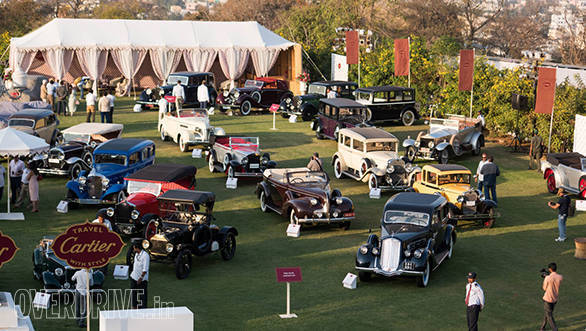 The success of these Cartier events has exceeded most expectations and such has been their impact, that the classic car scene in India has almost been completely transformed and energized. Car collectors now consider it an achievement to be invited to show their vehicles here and have started investing serious money, time and expertise in restoring them. In fact, the quality of restoration has grown to a level where it now almost matches best international standards and the number of people collecting old cars has also increased. Thanks to the recognition bestowed on classic vehicle owners by the Cartier Concours d'Elegance, many more cars and motorcycles are been preserved, saved and restored and the junking of them is almost a complete rarity now

Until this the sixth edition, all participation has been strictly by invitation only. But apparently, because there is now such a huge demand, the organizers have invited prospective entrants to send incomplete details including model details, chassis numbers and specific history of their vehicles, with recent photographs, toctws2019@gmail.com, latest by October 31st, 2018. The organizers say that in keeping with their commitment to promote and preserve Indian automotive heritage, only cars and motorcycles with Indian histories, or recent imports restored in India, will be eligible for entry. As the 2019 event will be held in West India, entries from the region and the city of Jaipur and its environs will be given preference. Only the finest examples in each class will be accepted. Rarity, history, condition and provenance will be taken into account when entries are being selected. If accepted, participants will be notified by an official letter from Cartier.

Preservation  up to and including 1965

Pre War Transportation - up to and including 1945 (special class)

As always the judging panel will include some of the world's leading designers, most successful industrialists, best known arbiters of taste, and most knowledgeable collectors of classic cars.