The Indian Government has announced that all vehicles must comply with Bharat Stage IV emission norms from April 1, 2017. According to reports, General Motors India is keen on keeping the Tavera in its portfolio even after 2017. It is currently in talks with Isuzu Motor to source a BS IV diesel engine for the Tavera.

It is also being reported that General Motors is talking to Isuzu about sharing engines, platforms and even products for the Indian market. The two companies are also discussing the possibility of co-badging a yet-to-be-launched Isuzu MPV, codenamed the RU30. This will be a proper Toyota Innova rival. 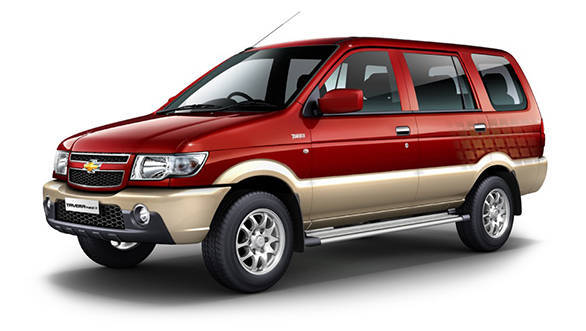 General Motors is trying to reinvent the Chevrolet brand in India. Although the carmaker has been present in India for over two decades, it is yet to register any profit. Currently, the company's annual sales have gone by half to just 50,000 units compared to 2011.

"General Motors is currently undergoing a major cleanup act. The management is all new. The plant in Gujarat is likely to be sold shortly. The company is also expected to retire some of the Chinese platform models like Sail U-VA and Enjoy. These tie-up talks are part of GM's endeavour to strengthen its appeal in the utility vehicle space," said a company official on the condition of anonymity.

It is also being reported that General Motors is exploring the tie-up possibility with Isuzu even though it is working on getting all-new products to India by 2018-19. If a tie-up happens between the two companies, General Motors will benefit from having a crucial vehicle in its line-up while Isuzu is likely to benefit from economies of scale. The Tavera that is on sale currently has a BS III diesel engine, sourced from the ICML Rhino.