CNBC-TV18 OVERDRIVE Awards 2016: Nominees for Motorcycle of the Year

Over the past few years, we have seen that the trend of this category being dominated by small capacity motorcycles has been changing. This year out of the 15 motorcycles that have been nominated for the Motorcycle of the Year award, only seven were under 200cc. That means over half of the launches this year has been motorcycles that aren't out to win the fuel efficiency crown.

We had the Bajaj Platina 100ES and the CT100 at the bottom of the rung accompanied by Honda Livo and the Yamaha Saluto. Then there was the beautiful Bajaj Pulsar AS sibling  the 150 and 200 with their fully faired sibling, the RS200. They were accompanied by Honda's Unicorn 160 and Hero's new Xtreme Sports - Hero's effort to re-engineer the Xtreme.

Then there was the Mahindra that we have been waiting for for years  the Mojo. Giving the Mojo a run for its money was Yamaha's newest entrant into the sub-500cc sports motorcycle segment  the R3. And let's not forget Benelli's naked sub-500cc motorcycle  the TNT 300. Accompanying the little TNT was bigger brother TNT 600i with it super smooth inline-four motor. But the Benelli wasn't the only inline-four in the mix. There was also the new Honda CBR650F, a typically smooth, fast mild-mannered motorcycle. And rounding up the list is Triumph's all new Tiger 800 which is now being assembled here. 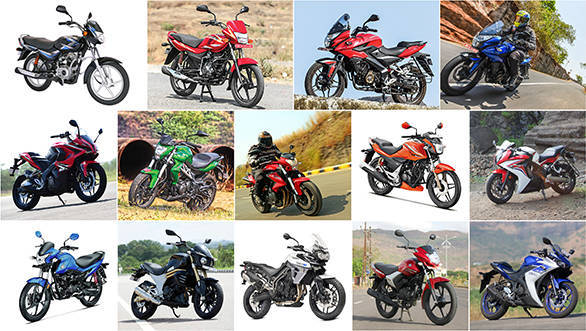 The Motorcycle of the Year category nominees will be judged by a panel of experts on a range of criteria (read more about our judging methodology here) including how well they suit the role, value for the money they demand and also how involving they are to ride. No matter the category, we at OVERDRIVE value rider involvement. A machine has to put a smile on its rider's face, no matter the power or price and that's definitely one of the criteria in our judging process.

The CNBC-TV18 OVERDRIVE Awards 2016 ceremony will be held on December 9, 2015. Stay tuned to know what we think are the best cars and bikes of the year.