Cristiano Ronaldo gifts himself a Bugatti Centodieci, the world's most expensive car

While we in India are dealing with rising petrol and diesel prices, a footballer at some part of the world has brought a brand new car. But this is no ordinary footballer, as we are talking of 35-year-old superstar Portuguese footballer Cristiano Ronaldo who has recently acquired the world's most expensive automobile, the Bugatti Centodieci which is reportedly priced at nearly Rs 80 crore in the international market. Ronaldo was celebrating his 36th Serie A championship victory by his club Juventus. In case, you too have your eyes on getting one of these, Bugatti has made only 10 units priced at 8.5 million euros each, and all of them are sold out.

You choose the view ðð

In case you happen to spot multiple units of the Bugatti Centodieci, which we hardly doubt considering its exclusivity, you can clearly recognise Cristiano's car as it has the CR7 initials on it. The footballer announced this to the world by posting a picture of his latest acquisition on Instagram. This is not the first time that Bugatti and Cristiano Ronaldo have come together as last month Nike launched the Mercurial Superfly VII CR7 "Dieci" Concept boots, that is inspired by Cristiano's passion for velocity and his love for the prestigious and speedy Bugatti supercars. 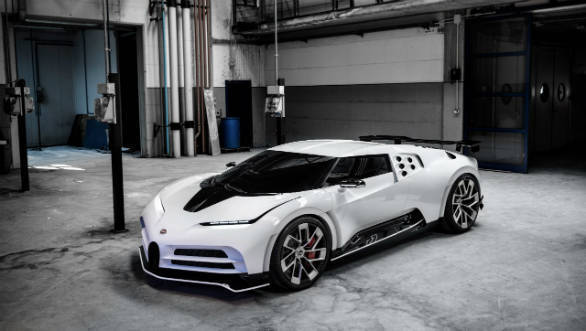 The name means 110 in Italian, a direct link to the EB 110's Italian origins under Romano Artioli. The car is limited-run project by Bugatti after the Divo. This too is limited to 10 units and is based on Chiron's running gear. The Centodieci is 20 kgs lighter too. Power from the 8.0-litre quad-turbo W16 has been upped by 100PS to 1,600PS, letting the Bugatti get from 0 to 100 kmph in 2.4s. Top-speed is limited to 380 kmph.