Dainese has finally entered the Indian market with their official outlet - D Store - opening in Orion Mall, Bangalore. The store has been opened by the Tusker Group, who also own the Harley-Davidson dealerships in Bangalore and Goa. Present to open the store was Pol Espargaro, the reigning Moto2 World Champion, who now heads to MotoGP for the 2014 season with the Tech3 Yamaha team. Also present at the opening of the store was Tomasso Bruzzese, regional manager, Asia, Dainese. 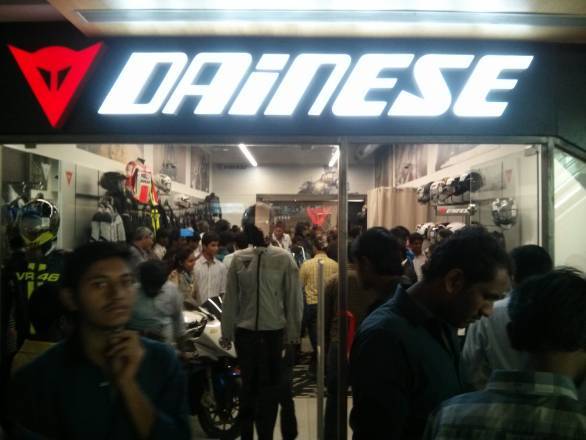 The D-Store currently stocks all manner of Dainese products - racing leathers, racing suits, gloves, boots, T-shirts and other riding apparel. The store also stocks AGV helmets (AGV was acquired by Dainese in 2007) and is expecting to receive AGV's premium helmet line - Pista AGV - soon. The Tusker Group also plans on opening an online store soon, so you can, if you so choose, order your riding gear online.

Dainese's foray into the Indian market is headed by Srinivas Reddy of the Tusker Group. And while Reddy had approached the Italian riding and racing apparel manufacturer a few years ago, the interest to break into the Indian market at that point, however wasn't high. A few years down the line, with more motorcycle manufacturers entering the country though, things have changed. "Premium motorcycles are more easily accessible to the motorcycle enthusiast, the number of people interested in motorcycling itself has grown and people are now more receptive to buying safe riding gear," says Reddy. And with a growing market and demand for specialist riding gear, the Italian manufacturer was keen on breaking into the Indian market at this point.

Speaking to OVERDRIVE Reddy declared that a key factor that also influenced Dainese's decision to enter the Indian market at this point was weather. The company makes high-quality riding leathers (textile and mesh) and race suits to suit (pun intended) the South East Asian market, which has similar weather conditions to India. The riding gear for these rather warm climes is specially made with focus on perforation and ventilation, and adapting a similar product line to the Indian market also made sense for the Italian brand, says Reddy. And speaking of the choice of Bengaluru as the venue of the store, Reddy stated that while Mumbai and New Delhi have a larger motorcycle market in terms of volume, having the advantage of motorcycle enthusiasts and the overall leather-friendly weather of the city, helped settle on it as the location of the store. Plans for expansion are in the pipeline with more stores to open in other parts of the country too.

You can visit the D-Store at 123A, First Floor, Orion Mall, Brigade Gateway, Bengaluru or you can check out their soon-to-be-launched website: http://www.dainesedstore.in/