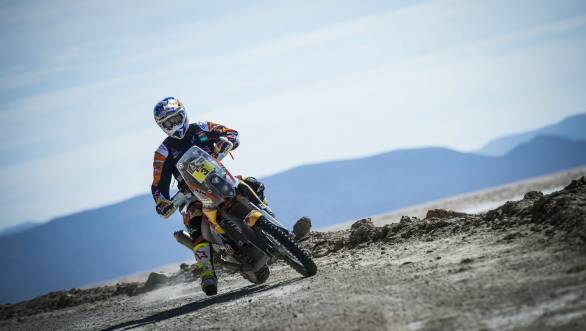 It was a second consecutive stage win, and his third in the 2016 edition of the Dakar, for Toby Price on Stage 6. The KTM rider was able to make a mark on the trails in Uyuni, despite at one point being 2min behind Honda rival Paulo Goncalves. And while Goncalves gave it his all, there was simply no denying his Australian rival victory.

In the overall standings in the motorcycle class of the event Goncalves still leads the way, albeit by just 35sec over Price. Third overall is KTM's Matthias Walkner, 2min 50sec behind.

Slipping down the order, though, is Honda's Joan Barreda Bort, with mechanical issues aplenty.

The stage at Uyuni proved to be rather unforgiving though. Retirements aplenty, including some high profile ones like Husqvarna's Ruben Faria who pulled out due to a fractured wrist, see the number of riders slowly dropping.