With Stage 9 of the 2017 Dakar being cancelled due to the heavy rains and landslides the competitors had one day to gather themselves and get to Chilecito for the next stage. The conditions in Stage 10 were harsh with high temperatures and challenging terrain. Additionally, there were plenty of navigational challenges to deal with along the 449km competitive section. 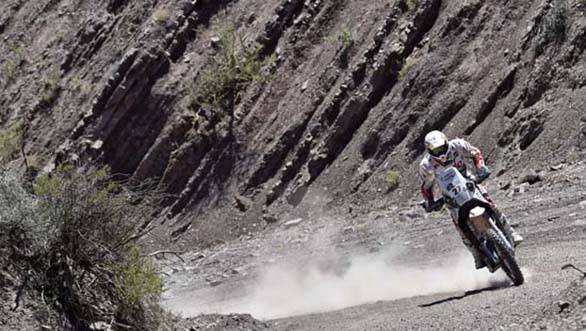 Hero MotoSports Team Rally's Joaquim Rodrigues said that the day was very extreme and that there was no point in the stage at which he could rest for even a minute. He lost some time in the beginning of the competitive section looking for a waypoint, and managed to get to the finish line in 19th place with a time of 6hr40m. This moved him down in the overall rankings by four places to 14th.

His team-mate, CS Santosh lost some time at the 53km mark trying to find a tricky waypoint. But once past that, he managed to pick up his pace to finish the stage in 37th place with a time of 7hr38m51s. This pushed him up 13 places in the overall standings to 50th.