Hero MotoSports Team Rally riders - CS Santosh and Oriol Mena - continued their solid performance at the 2018 Dakar Rally, both finishing Stage 8 in strong positions. The fact that both riders did well in the marathon stage was particularly commendable. 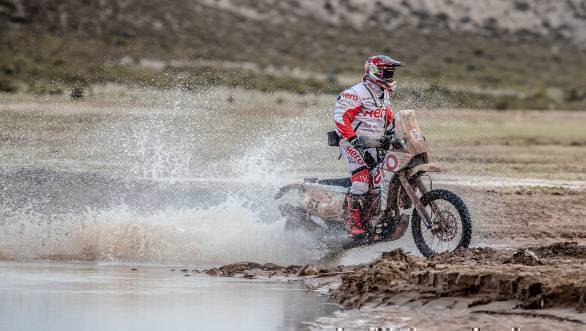 Oriol Mena finished Stage 8 in 12th position, which meant that he was able to climb into 18th position overall. Santosh too performed well, finishing the marathon stage in 38th position, helping him move to 42nd position in the overall standings.

After having spent the night at Uyuni, where riders had no assistance from anyone and had to repair and service their own motorcycles, the competitors had to travel from Uyuni to Tupiza. This was the longest stage of the Dakar rally, with riders having to compete 498km in the special stage, followed by an 87km long liaison section. The stage also had its share of high altitude riding in the mountain sand dunes at 3500m above sea level. 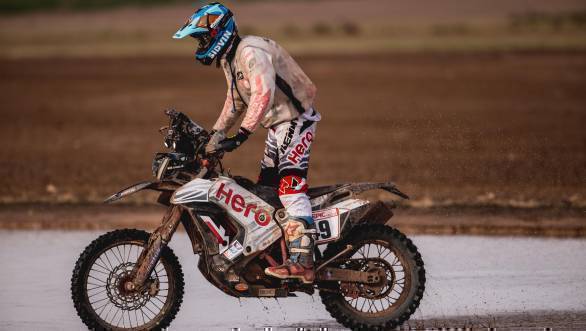 CS Santosh is currently ranked 42nd overall in the 2018 Dakar

The ninth stage of the Dakar has been cancelled due to excessive rains. The overflowing rivers are expected to be a threat to competitors. However, the riders still need to move into Argentina to get to their next bivouac at Salta, covering the longest liaison section of the Dakar.

Speaking after the stage, Oriol Mena said, "Today was a good day for me. My body was feeling good and I started the stage really well. For this stage I decided to ride with my full potential and finish the stage without any major mistakes. I did lose may be 20s in one small navigation error but it was ok as I reached the finish line and my bivouac in good time. So one day more gone and now one day less to Cordoba."

Meanwhile, Santosh said, "I think this Marathon stage was the hardest I have ever done. It was incredibly difficult as we did 80 km off-piste and the camel grass. I was physically drained with the high altitude riding and also crashed a couple of times. By the time I reached the marathon bivouac I had nothing left in me. This morning we had the longest stage of the Dakar which was tough again. Happy to be back here with the team, I missed these guys. Now we got a lucky break tomorrow and then we go racing all the way to Cordoba"