The 2019 edition of the gruelling endurance rally-raid, also the 41st time the event is being run, will take place entirely in Peru for the first time. The route is a 5,000 km coil, beginning and ending in Lima. The race will take place over 3,000 km in 10 special stages, and 70 percent of the running will be on sand. 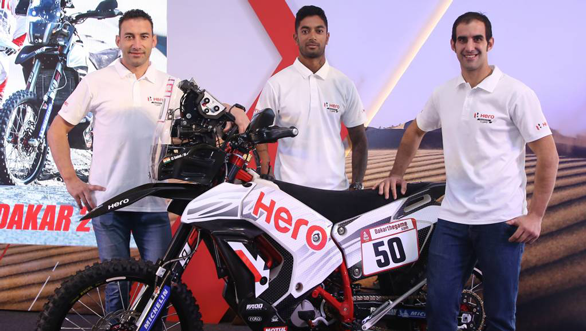 Hero MotoSports Team Rally is the motorsport division of Hero Motocorp, the world's largest two-wheeler maker. It was formed in 2016 and this will be its third consecutive Dakar Rally outing. The team earned a top-15 finish in 2017 and bettered this with a top-10 finish in 2018.

Additionally, the team has competed in other noteworthy events across the world. BAJA India and Desert Storm in India, Merzouga and Olibiya Rallies in Morocco, Baja Spain and Atacama Rally in Chile.

The three riders will compete in a revamped version of last year's Hero 450RR Dakar-spec bike. The motorcycle gets new suspension geometry and a new kinematics package. The cooling has also been reworked to handle the heat in Peru. The overall setup has been tuned to perform better in desert, keeping in mind the new conditions

The 2019 edition of the Dakar Rally will be held between January 6 and 17.