The fourth stage of the 2019 Dakar Rally saw competitors go from Arequipa to Moquegua for the first half of the Marathon stage. The going was tough for most competitors, but Hero MotoSports Team Rally's Oriol Mena continued his strong form.

Mena, who ended the third stage of the Dakar in eighth place, managed to end the fourth stage 11th. He achieved this not only by riding fast, but also using his judgement, knowing when to push hard, and when to proceed with caution. This meant that he was able to retain his 12th place overall in the Moto class of the event, after four stages of the rally. 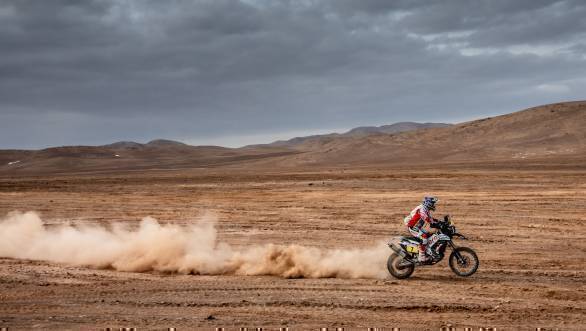 Oriol Mena pins the throttle on his No.7 Hero MotoSports Team Rally 450RR during Stage 4 of the 2019 Dakar Rally

Speaking of his day of rallying, Mena said, "The first part of the stage up to the neutralisation was extremely fast. I got into a nice rhythm and rode with the leading group for most of the first part. After the neutralization, I decided to ride with more caution in the fesh-fesh and the stony sections to avoid unnecessary risks. Happy to check  in my bike in perfect condition in the Marathon Bivouac and looking forward to the motocross style start tomorrow." 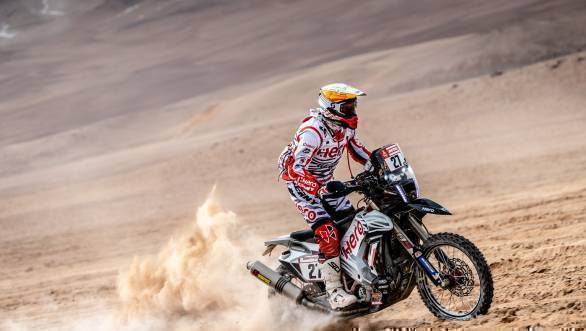 JRod astride the No.27 450RR on his way to 31st overall in the Moto class after Stage 4 of the rally.

His team-mate Joaquim Rodrigues had a tough start, beginning at the back and having to remain content with a cautious approach during the first part of the Marathon stage. This, because the riders ahead of him kicked up so much dust, that visibility was an issue, making it hard to ride any faster. However, after the neutralisation, the more technical section of the stage began. JRod was clearly in his element here, gaining positions over this portion of the stage, and ending the stage in 30th position. In the overall Moto class, he continues to be ranked 31st.

"It was not easy for me to catch up in the first part today as I was riding mostly in the dust from the guys in front of me. So I decided to stay out of the risks and just tried to avoid the dust," he said. "After the neutralization, I got into a good stride in the technical sections and managed to gain some ground. I feel good to have reached the marathon bivouac with me and the bike in good condition," JRod continued. 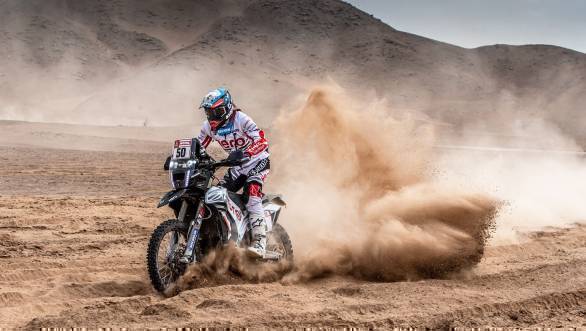 CS Santosh (No.50) is currently ranked 44th in the Moto class after four stages of rallying

CS Santosh also went for a more cautious approach. The Indian rider wanted to get himself, and his motorcycle, to the Marathon bivouac in good condition, given that there would be no assistance to the riders at this point in the rally. Santosh's approach resulted in a 51st position finish in the stage, which sees him ranked 44th overall in the Moto class.

Santosh said,"Well today I rode the whole stage in the dust, trying to pass the guys in front of me but also be safe at the same time. It was really tricky as there was so much of fesh-fesh around. Besides one or two tip overs, I am happy with the stage today. I think I am able to manage my race much better this year than last year. So I am happy with my progress and things are looking good so far."

The second half of the Marathon stage will see competitors move from Moquegua to the Arequipa bivouac, where they will be reunited with their teams.