The Hero MotoSports Team Rally outfit got off to a good start at the 2019 Dakar Rally. The team's three riders had to navigate many challenges as they travelled from Lima to Pisco for the first stage of the 2019 edition of the event. The stage comprised 250km of liaison and 84km of competitive running. And the riders rose to the challenge. 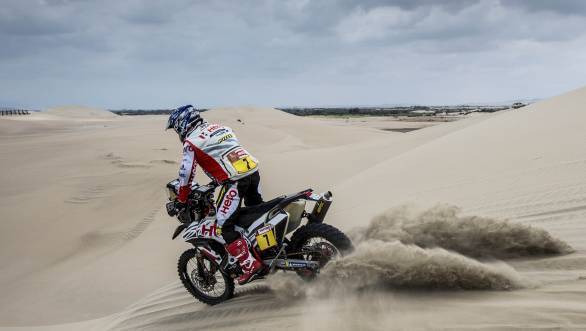 Oriol Mena, who ended the Dakar 2018 seventh in the Moto category (keep in mind it was his first ever outing at the Dakar), managed to carry forward his terrific form a year later. Mena (No.7) managed to end the stage 14th, 7min and 07sec adrift of the stage leader.

"Good day today overall except for a small incident where I overlooked a small hole on the other side of the first dune and had a touchdown. Well that's how this Dakar has started for me, but I am safely back at the bivouac and that's what matters. Tomorrow will be another day," said Mena of his performance in Stage 1. 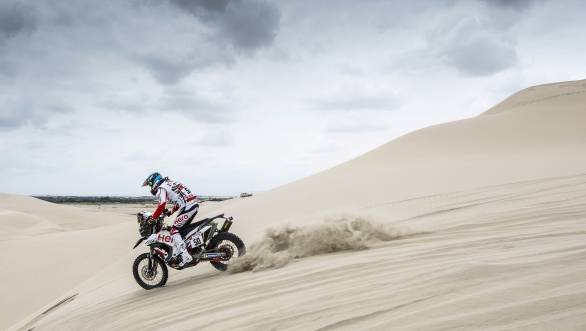 CS Santosh did well to break into the top 20 in the Moto category in the first stage of Dakar 2019 (Photo: © RallyZone - Edoardo Bauer)

Indian rider CS Santosh (who can be found on the official Dakar listing as S. Chunchunguppe Shivashankar) also performed very strongly, ending the stage 20th in the Moto category. Santosh, who rides the No.50 Hero RR450 Rally had stated before the event that he would like to break into the top 20 of the Dakar. And while there still is a long way to go, at least he's managed a strong performance in the first stage.

Speaking of the first day of rallying, Santosh said, "First day out of the books. I had butterflies in the beginning but it's always like this with the first stage of the Dakar. After the riverbed, there was a lot of dust but I got into my own rhythm. I am very happy to bring the bike home in the first stage and hopefully this will continue in the next stages as well." 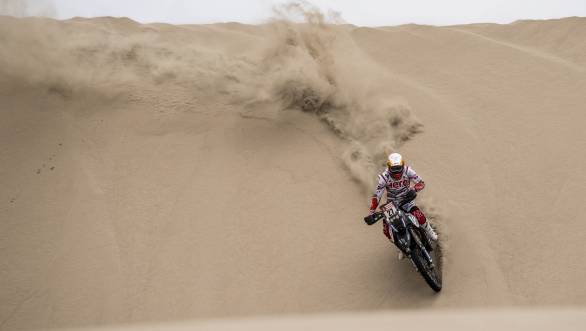 Joaquim Rodrigues, who crashed out of the rally last year, managed to put in a solid performance with a 23rd place in the Moto category of the event. Rodrigues, who rides the No.27 Hero RR450 Rally is hoping to put the crash (one that made him contemplate quitting the sport entirely) behind him, and perform strongly over the course of the event.

JRod had an intense day of rallying, particularly because it was the same stage on which he crashed last year that he returned to today. Speaking of this he said, "Today was an emotional stage for me. Honestly, I was a little bit nervous starting today as this was the same stage where I had crashed last year. So I rode really tight today, may be even braking too much at times to be on the safer side. But I am happy to see the first stage behind me and now I can focus on getting into a good rhythm in the next few stages."

Tomorrow, the 8th of January, is the first long stage of the Dakar, with competitors heading from Pisco to San Juan de Marcona. Riders in the Moto class will have to tackle 211km of liaison and 342km of Special Stage.