The fifth stage of the 2020 Dakar Rally took competitors from Al-Ula to Ha'il, over a total distance of 564km (211km liaison; 353 special). The stage, while not as technical as the previous stages, was still impressive with dunes and sandy hills, and nearly 200km off-piste. Aiding the competitors just a little was the fact that the stage also had gigantic rocks along the way, which helped participants avoid making navigational errors. 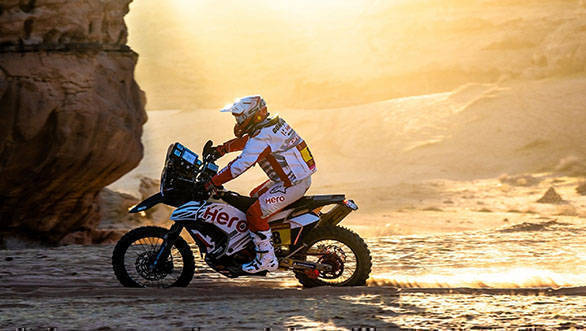 Hero MotoSports Team Rally managed to continue their good form from the previous stage. Their most impressive rider was Paulo "Speedy" Goncalves, who once again took a top 10 finish for the team. While Goncalves stormed to fifth place in Stage 4, he managed to end Stage 5 in 10th position. This means he's managed to move up to 59th overall, slowly recovering from the dreadful setback of Stage 3 of the rally.

Speaking after the stage, Goncalves said, "Today there was a change in the scenery from the trials and stony tracks of the last 3-4 days to the more open desert today. In the first part of the stage I tried to push hard and rode well. After the refuelling, there was 200 kms of open off-piste stage that could be fast but dangerous as well. So I decided to calm my pace a bit down to avoid crashes and arrived well for me and the Hero team. Now we have one more day before we get a rest day to recover well to race for the second week." 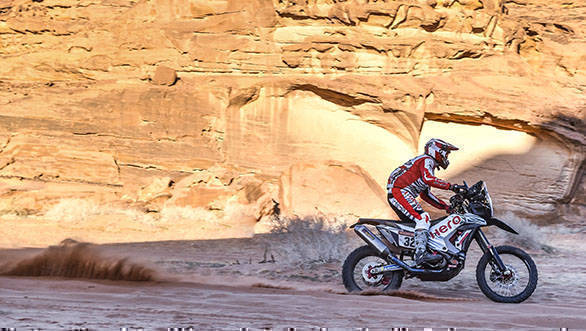 Also putting in an impressive performance was Sebastian Bühler. The German rider has been extremely consistent over the first five stages of the 2020 Dakar, and ended Stage 5 in 21st position. This means that he now moves to 18th overall in the motorcycle category. "It was a hard stage and we had almost 200 kms in the off-piste towards the end. I think I did well today, tried not to go too fast to avoid making any mistakes. The rally is very long and I want to finish with a good place. So let's see how it goes tomorrow," said Bühler. 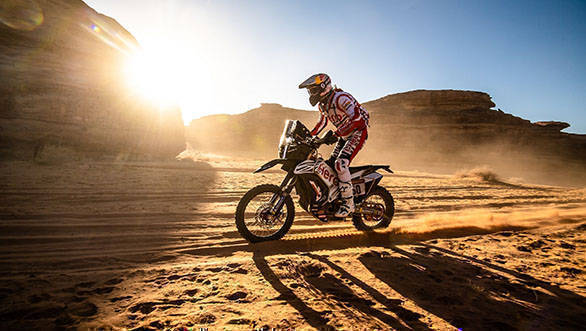 In the meanwhile, Indian rally-raid star CS Santosh also had a good stage. Santosh appears to have found his rhythm now, and seems to have put behind him the accident that he suffered on the first stage of the rally. He finished the stage 38th, and moved up 1 position to 37th after the Dakar Experience competitors were eliminated from the list. This moves him into the top 40 overall - he is ranked 39th after five stages.

"What an amazing last 2 days it has been at the Dakar," said Santosh sounding very happy at the end of the stage. "The last two stage have been tough but really incredible. In the beginning part of the stage today we had some rocks, sands and piste but the second half, for about 200 kms was just open off-piste, camel grass and undulations. I really enjoyed the riding the stage today and I am starting to feel better and more confident on the bike. Can't wait to see what the next few days are going to bring to us," he added. 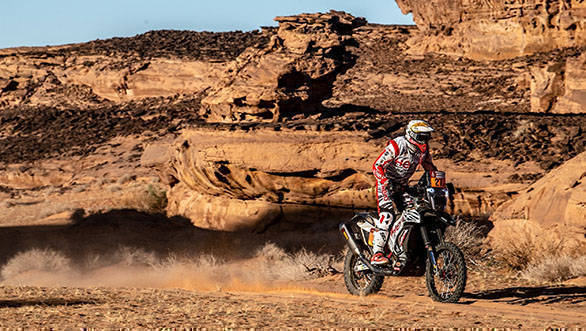 J-Rod powered through to 25th in Stage 5

Also putting in a solid performance for the team was Joaquim "J-Rod" Rodrigues. While J-Rod might not be part of the overall Dakar rankings, he is still allowed to compete in each stage as per the newly introduced "Dakar Experience". He finished 25th in Stage 5, despite a minor crash. "Difficult day for me today as the stage was really hard. In the beginning I was riding really well but in the second half I had a crash and lost some time. But I am ok for tomorrow and happy that I was able to get my Hero back to the finish line," said a determined J-Rod.

Stage 6 of the Dakar is a long one. Competitors will have to cover 353km of liaison, and 477km of special, on their way from Ha'il to Riyadh where they will finally break for the much-needed rest day.