Who would have thought that getting completely and thoroughly lost in the sands of a desert would inspire someone to dream up the world's most gruelling off-road endurance race. But that is exactly what happened to Thierry Sabine. Back in 1977, Sabine, then a competitor in the Abidjan-Nice Rally found himself lost in the Ténéré desert. And while other people might have panicked in the same situation, Sabine merely decided that getting lost in the desert was a challenge worthy of turning into a competitive event. And so in 1979, the first Dakar Rally was held, going from Paris, France, all the way to Dakar, Senegal. 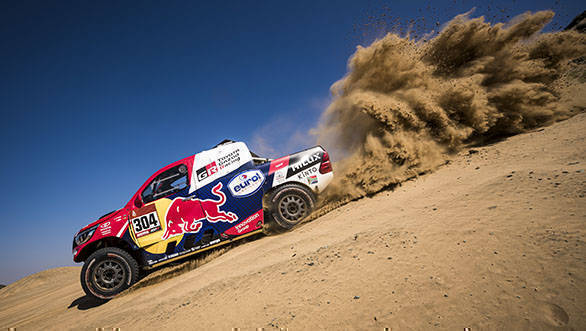 The Dakar became known as THE rally. A rally so long and so punishing to both man and machine, that winning it really was the ultimate prize. People from various disciplines of motorsport took to the event, fielding cars, motorcycles, and trucks. Laying their hands on that coveted trophy - designed to look like a bedouin - was the ultimate goal. The Dakar attracted names like Le Mans legend Henri Pescarolo, F1 and Le Mans star Jacky Ickx (who won the event in 1983), and WRC legend Ari Vatanen (who won in 1987, 1989, 1990, 1991). It created legends out of mere mortals - take for example Vladimir Chagin who is known as the Tsar of Dakar having won the truck category a full seven times. Or Stephane 'Mr Dakar' Peterhansel who has six wins at the event on a motorcycle, and seven wins in a car. And the Dakar also made motorsport fans from all over the world go flocking to the countries that hosted it.

But, with the passage of time and changing political scenarios, the rally itself changed. In 2008 the event, due to start in Lisbon, Portugal, was called off because of feared terrorist attacks in Mauritania. And so the Dakar shifted to South America. Between 2009 and 2019, the Dakar bivouac made 11 visits to the continent, with the rally being held in Peru, Bolivia, Argentina and Chile. The essence of the event remained the same, even if it no longer featured the sands of the Sahara. There was, instead, the Atacama and the Sechura deserts. The riders were pushed to their extreme when they needed to cross into Bolivia, battling cold and altitude sickness en route the world's highest capital city - La Paz. And competitors were treated to some amount of comfort as they went into Argentina, glad, almost, that the worst was already behind them. The event didn't run without criticism, though, especially after the 2014 edition damaged archeological sites in Chile.

In 2019, though, the Dakar was held entirely in Peru, when neighbouring countries - Chile, Argentina and Bolivia - failed to come to an agreement with the Amaury Sports Organisation (ASO). In April 2019 the ASO confirmed that the Dakar would move to Saudi Arabia in 2020, having bagged a five-year contract to host the event. The move did raise a few eyebrows, with more than just a few people questioning the ASO's decision to move to the country. Two days before the first stage of the rally kicked off, Human Rights Watch ran an article about how the country was a "repressive" environment in which to hold an event like the Dakar. 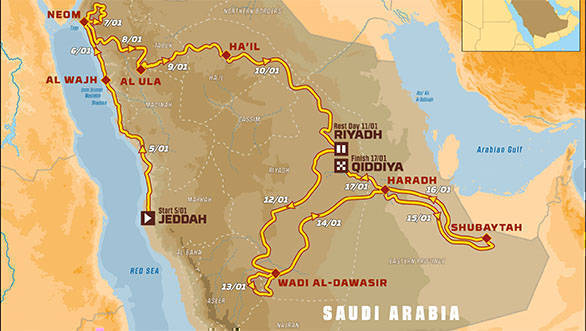 However, now the rally is already underway. Saudi Arabia hosting the Dakar also means that the event is finally back in the land of the bedouin. Competitors will have to traverse a distance of 7500km (75 percent of the rally will be held in sand), moving through the desert, and also through the Asir mountain range. As far as terrain goes, the country has plenty of it to offer, with approximately 1.4 million square miles to pick from. Three of the special stages are meant to be incredibly difficult, extending over more than 750km, which means that competitors will be brought to the very limits of their endurance. Here, then, is a quick overview of the 2020 rally route: