The 2020 edition of the Dakar Rally has gotten underway in Saudi Arabia, with competitors traversing the 752 kilometres from Jeddah to Al Wajh during the course of the rally's first stage. With 319km of the total distance comprising the special stage, it was a good sign of things to come as the event progresses. The stage featured challenging navigation, fast and winding off-piste sections, dunes, and stony terrain. For the Hero MotoSports Team Rally outfit, the Stage 1 of the Dakar proved to be quite tricky, with both highs and lows in equal measure. 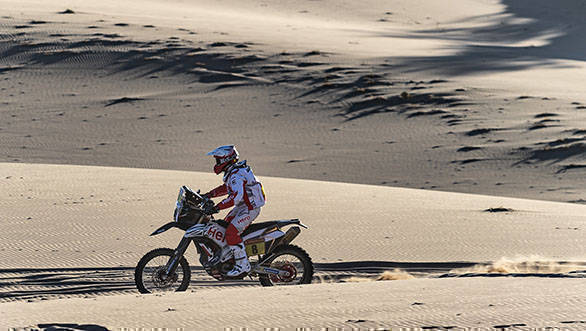 Let's start with the highs. Paulo Goncalves led the way for the team, starting cautiously, but then mounting a solid attack over the course of the second half of the stage. He managed to end the stage 12th, which is a great start to his Dakar. Goncalves is one of the more experienced Dakar riders around, with 12 starts to his name. His best performance at the rally was 2nd in the Moto class in 2015, and there are big hopes that he will finish within the top 10 in his first Dakar for Hero MotoSports.

Speaking of his performance during Stage 1, Goncalves said, "It was a really interesting start of the Dakar 2020. A big stage of 320 kms and a mix of everything from stony tracks to trials to sand dunes. The navigation also was very complicated so I decided to ride with caution in the beginning to avoid navigation mistakes and crashes. I am happy with my start here as my feeling is good." 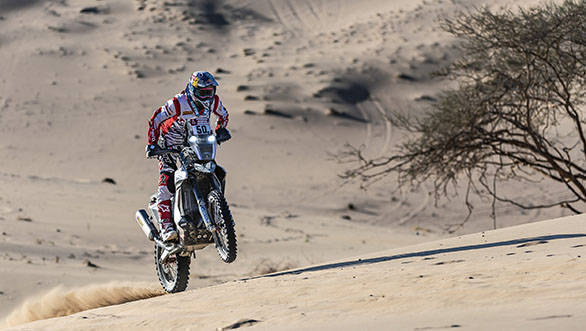 CS Santosh, India's rally raid star, had a tough outing in the Saudi Arabian dunes. Santosh ended the stage 39th, having had to deal with a couple of minor crashes along the way. Despite the fact that he injured his hand a little, the Indian rider is confident of his rhythm, and stated that he had a good feeling about the rest of the Dakar.

"I was really excited to see what the Saudi terrains have to offer today. It was a really fast stage and had some technical sections as well with stones. I think I put together a good starting stage until after a tricky stony section where I had a crash and hurt my hand a bit. Overall, I am happy with my start and to see the back of stage 1 at the Dakar 2020," Santosh said of the beginning of his sixth Dakar. 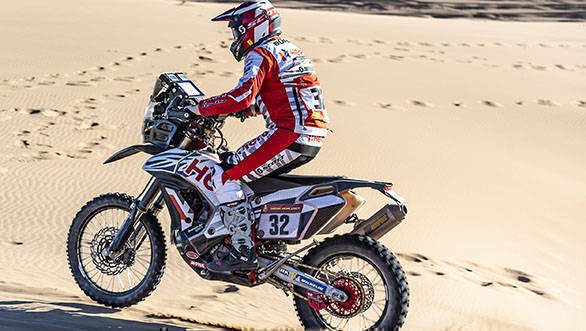 32nd for Sebastian Buhler, despite having to make an extra loop to catch a waypoint

Sebastian Buhler, who replaced the injured Oriol Mena at the Dakar 2020, finished the day 32nd, after having to make an extra loop to catch a waypoint. But the going was the toughest for Joaquim Rodrigues, whose motorcycle developed a mechanical issue that forced him to give up on the stage. Rodrigues will be allowed to restart the rally for Stage 2, as per the newly introduced "Wild Card" rule. He will be eligible for stage wins, although out of contention for the overall victory. This is a big blow to the Portuguese rider's hopes at the Dakar 2020, and it's also the second time that he's had issues during the first stage of the Dakar. In 2018, Rodrigues crashed out during Stage 1, injuring his back, and had to sit out most of the season while he recovered. 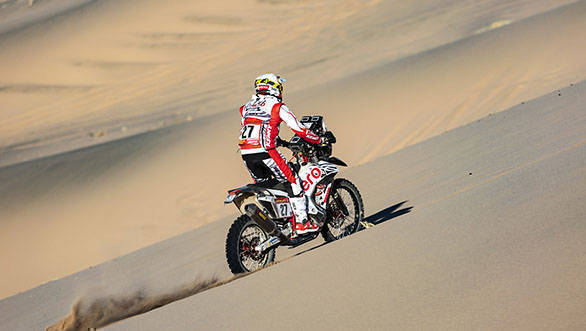 Speaking after the stage, Rodrigues said, "I started the stage really well and got into a good rhythm. Later on into the stage my bike started having a problem and I had to stop. I tried to figure out what was wrong and fix it but I couldn't get it to start again. It's very unfortunate, but the rally is so unpredictable and these things happen. Now I will try to restart tomorrow under the new rules but my race for overall results is over. Now I am going to focus on finishing each stage and helping my teams as much I can."

The second stage of the Dakar begins in Al Wajh and ends in Neom. Competitors will travel along the Red Sea for a special section of 367km.