Tarun Reddy has been making steady progress in the Formula Renault Championship in the UK since he started out in his first season of international racing earlier this year. The Snetterton round of the championship proved to be his best yet, with the 16-year old driver finishing scoring two podiums and one fourth place in the championship. And it was a good race weekend for Reddy, who finished the Friday practice session at Snetterton at the head of the timing sheets. 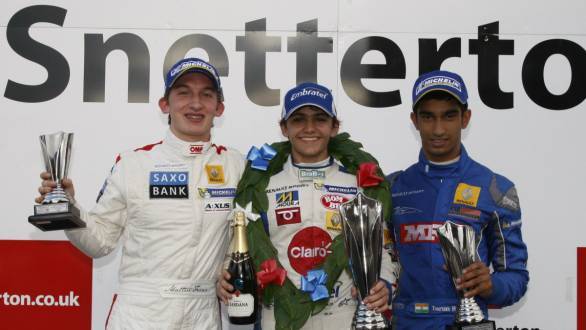 For the first and third races, Reddy qualified fourth, while for race two he qualified sixth. But the fourth place qualifying position was good enough for a podium. Reddy managed to get off to a good start during the first race, very nearly making up positions on the first lap of the race. But it was on the fourth lap that he managed to jump to second place, and defend against the attacks of Italian racer Matteo Ferrer. Reddy managed to hang onto his second place position and finished the race behind winner Pietro Fittipaldi.

During the second race, Tarun moved from sixth place into third during the beginning, passing three drivers in the first two corners. Once in third position he hung onto the place and kept up with the drivers ahead of him.

The third race also saw Tarun make progress, moving from fourth place to third temporarily. However, Piers Hickin managed to get ahead of Reddy on the fourth lap, and Reddy had to settle for fourth place overall.

Now there are three weeks before the penultimate round of the championship, at Croft on 20th and 21st of September. "We've had a day of testing at Croft and we seemed quite fast," said Tarun. "It would be a good place for my first win in the UK and I will give it 100 per cent!"