I was standing in the Boston airport, about to board a flight, thinking about how the red eye across the Atlantic will mean a day of napping and relaxing on the other side. Then, the phone rings. "Karun, it's Phil Marshall from Sky Sports. How do feel about driving two race winning F1 cars from the 1970s tomorrow?"

Two thoughts ran through my mind (a) Ooohhh yes! and (b) it's going to be a long day ahead. So after a sprint through Heathrow, I went to my house in Brackley to collect my kit (via the Korean embassy to drop off my passport) and then charged across to Snetterton circuit for one of the best days of my life. By this stage, I had been awake for 22 hours straight, but I didn't care! 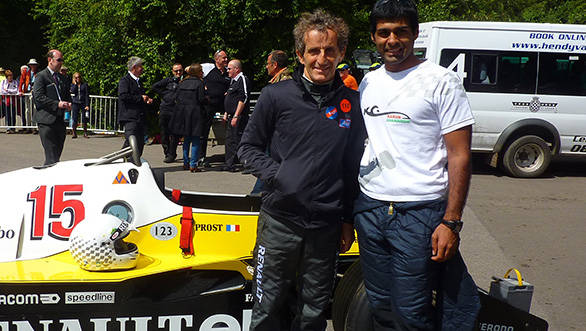 By the time I got there, I was given a quick brief on email about the two cars I would be driving - the 1974 Ferrari 312B3 in which Niki Lauda won his first Grand Prix and the 1977 McLaren M26 in which James Hunt won his last. Just reading up about the technical details made me think of all the videos I saw as a kid of these guys fighting it out throughout the late 1970s and with the Rush film focusing attention on this era again, 1970s F1 is back in the larger public eye.

I drove the McLaren first and my first impression was just how comical the tyres on these cars look, with the tiny fronts and the huge rears! It really looks like they should belong in a comic book. As you pull away and get to the first hairpin, you wait for the understeer but amazingly it turns straight in. The suspension design and geometries must really have been designed around these tyre sizes and it really makes you remember how this was the pre-aero days where the emphasis was more on chassis design and engines rather than aerodynamics.

I haven't driven at Snetterton in 9 years and the circuit layout has dramatically changed since then but once I get warmed up, the McLaren was just a joy to drive. The visibility was so much better than we have in a modern car and the drivability of the engine was fantastic. There are no surprises and the torque curve seems very progressive which makes it very useable out of corners across the speed range. All the videos of Hunt powersliding the car out of corners suddenly seem normal and the huge rear tyres offer great traction. The gearbox was the other very impressive part of the car. For something produced 36 years ago, it's amazing how precise and user friendly it was. I never really missed a shift and straight out of the pits I was able to attack and go quickly down the gears. If you think of what design and engineering tools they had then when compared to now, it's really impressive.

A quick switch to the Ferrari reminds you of the cultural difference between pure British engineering and something built with heart, soul, passion and a bit of madness! Nothing is quite as functionally precise as the McLaren, some bits are fantastic and some not so much. There are also some real quirks. For example, the gear lever has a small metal shift gate much like the road cars used to have so it's actually quite hard to select gear. The engine wasn't as smooth or drivable as the Cosworth DFV in the McLaren but once it gets going, the sound of that flat 12-cylinder Ferrari is just beautiful.

Every kid in the world who dreams of being a racing driver has dreamt of driving a Ferrari F1 car. As I charged down the straight with the engine pushing 11,500 rpm it really was a pretty emotional moment - the sound was so unique that it was ringing in my ears 5 hours later but I didn't care. The chassis felt very well balanced in the slow corners but didn't quite have the grip of the McLaren in the faster corners although I had to be mindful of the fact that they were built 3 years apart.

So how does all this compare with the modern era of F1 racing? Well, I think the short answer is to say it's like comparing the analog and digital world! Everything in the modern F1 car feels refined and filtered. All the sensations you feel from the steering, chassis, tyres and engine have some form of electronics or design technology that don't give you this pure, raw feel that you get in a pre-1990s racing car. Everything shakes and vibrates but the grip you feel and the sensations you feel in both these 1970s classics are just pure and unadulterated... It feels like the cars have soul!