KTM took the wraps off the 2017 Duke range here in Milan today, and the headliner for us in India was the KTM 390 Duke. The new motorcycle has been spotted in spy shots before, and the overall design looks more focussed and mirrors the KTM 1290 SuperDuke a lot more closely than before. Before you ask, the power remains at 44PS, but this is an all-new motorcycle in all kinds of ways.

The engine is similar in spec to the old KTM 390 Duke. It is a DOHC, 4-valve single that now gets standard ride-by-wire. There were rumours that India may not get the Euro-VI ready ride-by-wire version, but KTM has told OVERDRIVE exclusively today that there is only one version and that this 390 is a global model. India will get the ride-by-wire model as well. 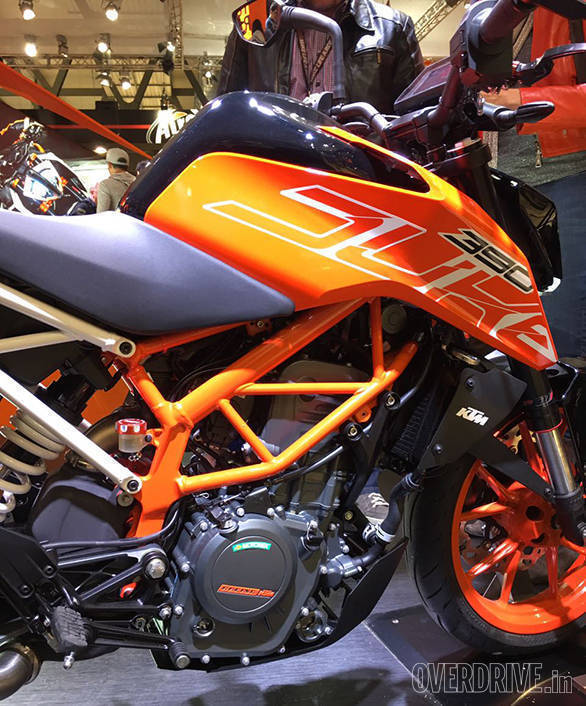 The engine makes 44PS just like the old Duke, but the change is in the torque. KTM says in places as much as 3Nm extra torque is available which dramatically changes the performance and feel of the motorcycle. We don't have a confirmation of whether or not the gearing has changed. 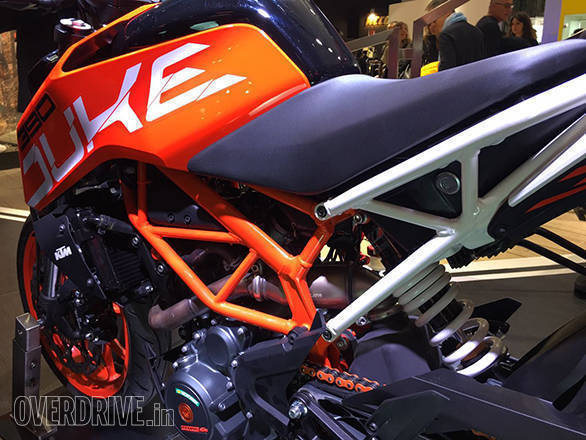 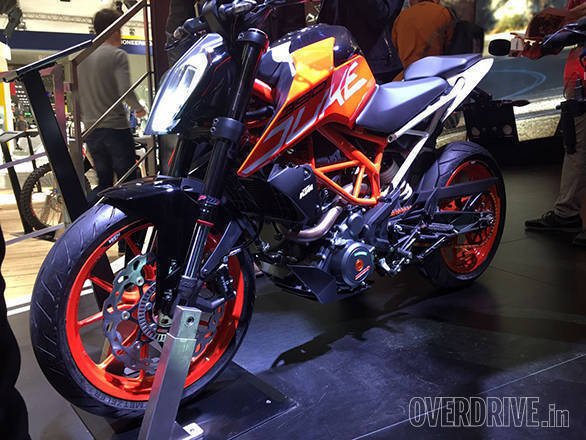 KTM has done a lot of work on the friction inside the engine, and you will hear references to the DLC-coated finger followers etc. that are part of the efficiency improvement measures in the engine.

KTM confirms that the basic chassis has not changed significantly. The wheelbase and steering geometry remain identical to the current motorcycle, and they're rather chuffed that the weight has not changed either. 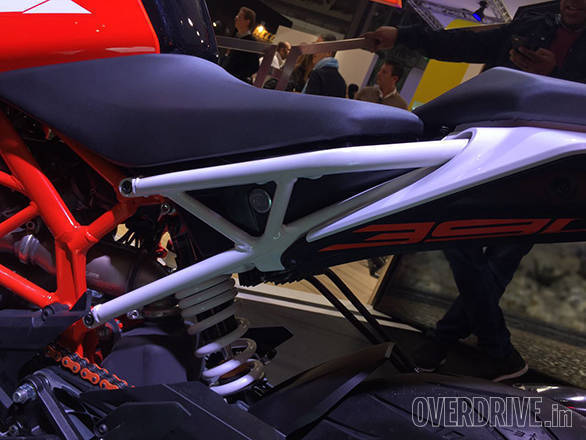 But this will be a dramatically different motorcycle to ride. The new upside-down forks are 43mm units, but they now use one leg for compression and one for rebound. One KTM official told us that the level of sophistication and control this brings is impossible to describe. The KTM 390 Duke will feel like a big motorcycle when you ride it, he said.

Also new is the bolt-on subframe. KTM has changed the angle of the seat, and the tail now kicks up a bit higher than the outgoing motorcycle. KTM says the combination of the new tank and seat, 3mm higher ride height and the new subframe angle produces a more connected riding position.

It's most certainly a more 'expected' design if you think the 1290 SuperDuke, as the flagship KTM street bike sets the tone for the other Dukes. The new tank extensions looks good and create a more spacious motorcycle than the current one. The tank is also steel rather than plastic and KTM says this does not raise the overall weight of the motorcycle. The 13.4-litre tank is going to be a big deal for those who take the 390 out on the highway regularly. 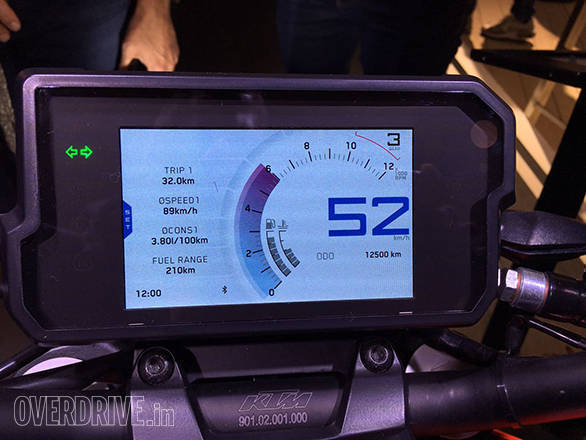 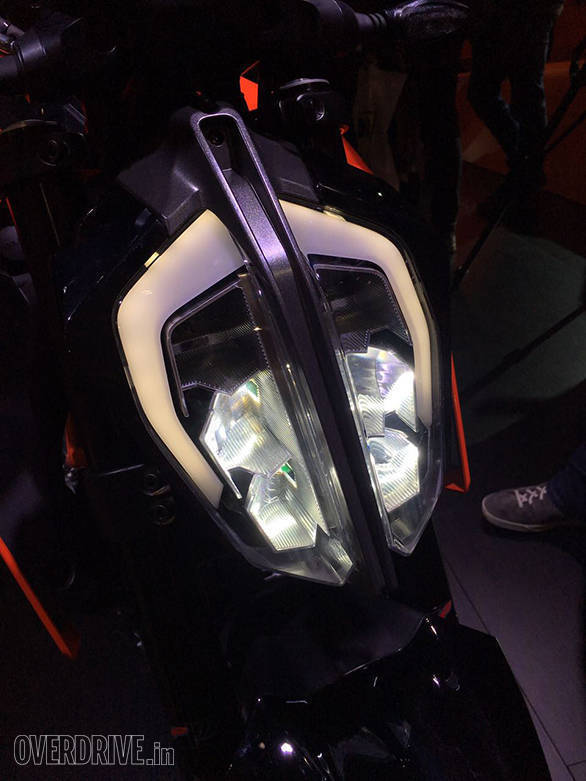 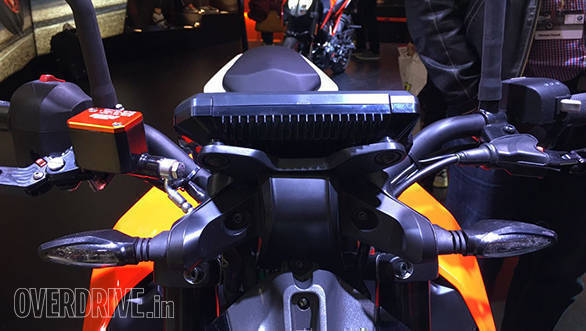 Small but useful additions include the adjustable levers, LED headlights and a few other bits. KTM is also offering an standard colour TFT screen which is vastly easier to read than the current unit. The screen includes the optional 'My Ride' feature which allows you to see phone notifications and what have you. 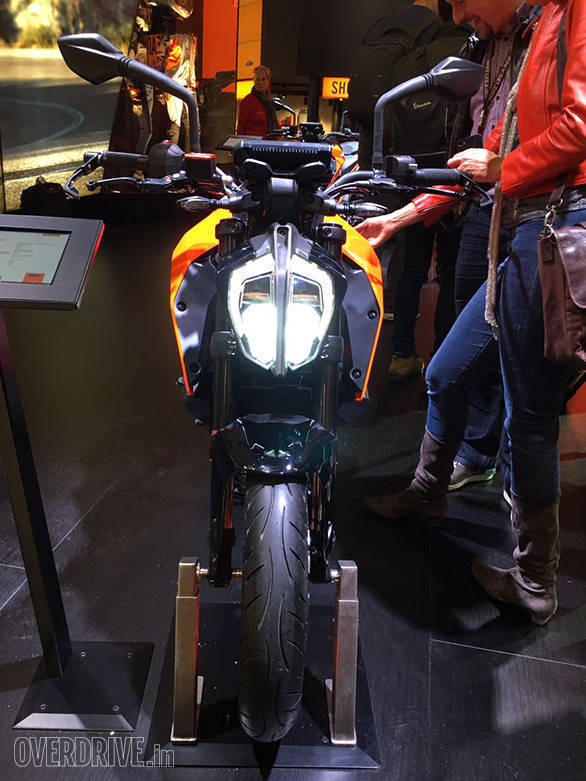 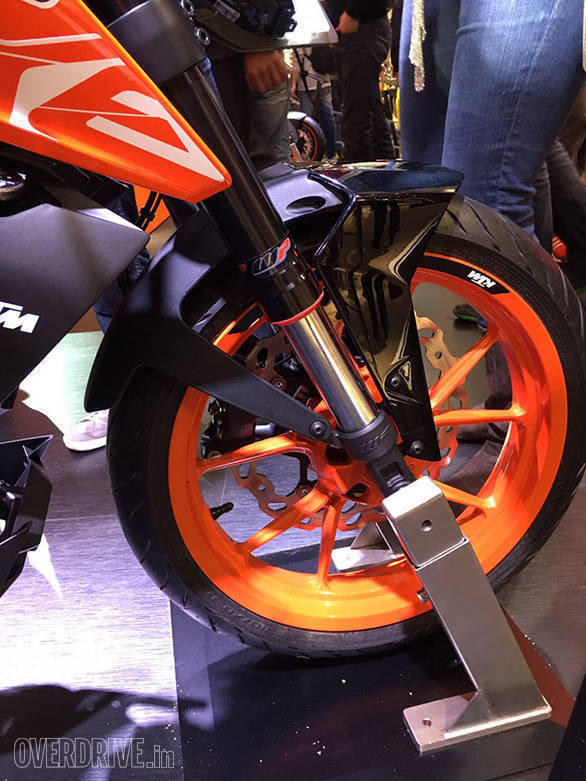 KTM intends to have a very rapid roll-out. All the smaller Dukes will go into production shortly and KTM expects the 125, 200, 250 and 390 Duke to be on sale globally as early as January. KTM does expect a small price increase, but in Europe the price will rise just one per cent, our estimates.

Expect the new KTM 390 Duke to go on sale in India by February with prices very similar to the current ones. The 125 and the 250 will continue to be made in Chakan alongside the 390 and 200 for export.

For more stories from OVERDRIVE on the EICMA show, click here.