Tired of traffic clad roads in the city? Worry not as the Boring Company might have devised a solution for it. Yes, that's the name of the infrastructure and tunneling company. Founded in late 2016 by the maverick Elon Musk, this company will be building a network of tunnels to help ease traffic congestion. Recently, Musk released a teaser image of the tunnel with a Model S parked inside it. 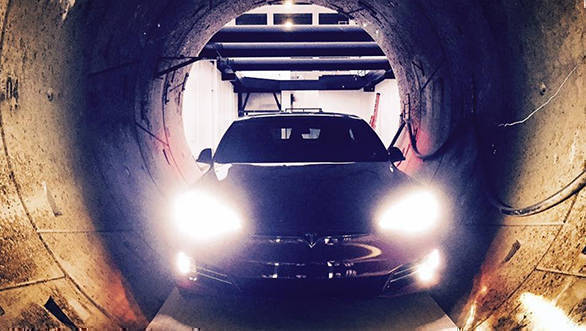 It might read as one of the scenes from a James Bond flick but this one will be turned into reality soon, if Musk has its way. According to the tunnel system, cars will be lowered down to the tunnel from the road with the help of an elevator. It will then be placed on a sled that will transport the cars by running on magnetic rails. The sleds will using the same powertrain as the Model S, said Brett Horton, senior director of facilities and construction, SpaceX and Boring Company, in one of his presentations. One of the video released by the company claims that the sled can travel at speeds of 200kmph.

This initiative is in line with Musk's Hyperloop plan wherein he wants to establish an effective and a reliable transportation system for people and goods packed inside reduced-pressure tubes. The key element here will be the speed of travel as during one of the test runs, the SpaceX's tube reached a maximum speed of 324kmph. Musk has also already got an approval to develop a 3.2km test tunnel in Hawthorne, Los Angeles. The Boring Company has started the project by digging 160 feet under Space X's headquarters. In the following phase, it will built the 3.2km tunnel directing towards the Hawthorne Boulevard.

If the speeds mentioned have already impressed you, there is even more to it. Musk claims that the system has the potential to reach speeds of upto 1,300 kmph. His company is working on such hyperloop that will connect New York to Washington DC.