Why is the Belgian Grand Prix so important? Other than the fact that it's a race that takes place at Spa-Francorchamps - the most hallowed track of them all - it's also a race that is timed to perfection. When F1's summer break is over, the V8 engines rev for the first time at the Belgian track. A race at Belgium signals that the championship is now at a critical stage - and it usually is the first few races after the summer break that give a sign of things to come. A harbinger of exactly who will win the championship.

On the Saturday of the Grand Prix, Mercedes was already up to speed. After their now not-so-secret tyre test with Pirelli post the Spanish Grand Prix, the Silver Arrows had started to win races, and claiming pole position was becoming a regular affair. At Spa, after already having claimed three successive pole positions, Lewis Hamilton went ahead and claimed his fourth pole of the season. Behind him were the Red Bull duo - Sebastian Vettel and Mark Webber. Would Hamilton be able to win the race at Spa? We're not sure that even Mercedes, despite Hamilton's win at Hungary, believed that he could. 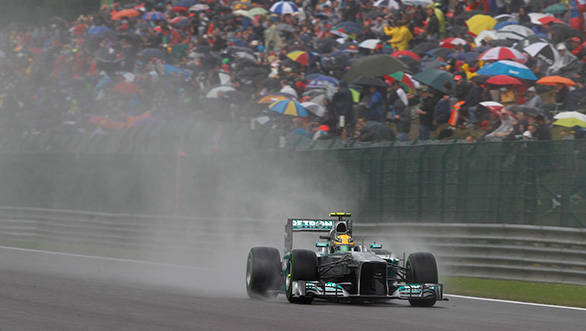 When the five red lights went out at Belgium, the Mercedes took the lead for a very short while. Once Vettel got up to speed, there really was no keeping him behind. Seb was past on the Kemmel Straight, extending his lead over the Mercedes at Les Combes.

Further down the order, the man on the move was Fernando Alonso. Starting ninth on the grid, things really weren't looking all that good for the Ferrari driver. But, as he has proved so often in the past when he has dragged a somewhat ailing Ferrari to the head of the pack, you must never count Alonso out of the reckoning. By the end of the first lap, he had managed to make it to fourth, getting past Jenson Button. And from that point on, Alonso was gunning for a spot on the podium, and his rival for most of the race was going to be Hammy. 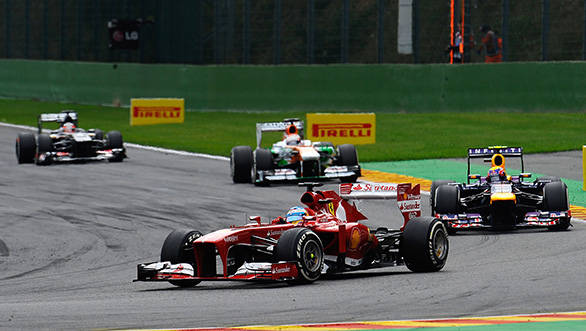 Kimi 'Mr Consistency' Raikkonen was having a tough time. Starting the race from eighth on the grid, Raikkonen fell back at the start, when a tussle at Turn 1 with team-mate Romain Grosjean saw him come out worse for the wear. To be fair to RoGro, though, he managed to keep his nose clean, there was no contact with any other car, and he (and more importantly those around him) made it out of Turn 1 safely. Raikkonen, who had managed a record 27 consecutive points finishes in F1, didn't look like he'd make it into the points this time around. As the race wore on, it turned out that not only would he not finish in the points, he wouldn't finish the race at all. It was his first DNF after 38 consecutive race finishes. The cause of the retirement? A tearoff strip from helmet visor got stuck in the brake duct sending the black and gold Lotus into retirement.

Meanwhile, as Vettel raced away at the head of the grid, with Hamilton trying his hardest to keep up with the Red Bull, a scarlet Ferrari was beginning to prove it still had some hopes of putting a dent in Vettel's title hopes. Alonso was past Hamilton, running in second. Would he be able to catch Seb Vettel and challenge for his first ever race win at Spa-Francorchamps? Well, with 10 laps to go, the gap between the two was close to nine seconds. It didn't look likely.

As the chequered flag fell, Alonso crossed the line second, behind Sebastian Vettel.  It was Vettel's fifth race win of the season. A win that saw him consolidate his lead in the championship to 197 points. Behind him, Fernando Alonso moved into second place in the championship with 151 points, while Lewis Hamilton took third in the standings with 139 points. Poor old Kimi, who'd been second in the championship until the start of the Belgian Grand Prix was bumped down to fourth place. 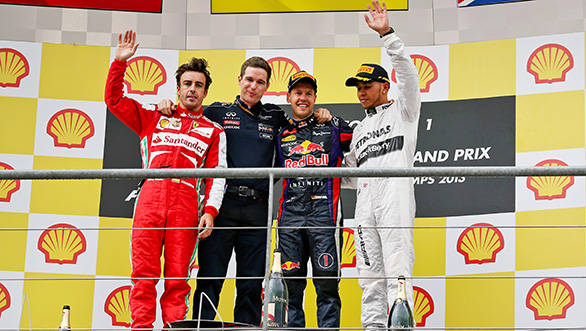 For those of you wondering why on earth the fans in the grandstands were erupting into boos and cheers all at once, it was because of the Greenpeace anti-Shell protest. Shell, who are a major sponsor in Formula 1, are busy drilling for oil in the Arctic region, something that has irked Greenpeace activists all over the world. At the start of the race the Greenpeace activists paraglided onto a grandstand at Spa and attempted unfurling a large banner that read "Arctic Oil. Shell No!" Another protester managed to get up above the podium while Alonso, Vettel and Hamilton were being handed their trophies, and waved a similarly worded banner before security guards caught hold of him and escorted him away. It didn't appear to affect the champagne ceremony too much though.

F1 is next heads to Monza for the Italian Grand Prix on the 8th of September.