When Sebastian Vettel took pole at the Italian Grand Prix, one thing was fairly clear. Unless the tifosi could conjure up some amount of scarlet voodoo, there wasn't much that could stop Seb from taking victory at this, a track that supposedly doesn't favour the Red Bull Racing team.

There were rumblings of concern from the F1 paddock around an hour before the race, though. The sunny, cloudless Monza sky had been replaced by rain clouds aplenty. Things did look like they could get away from Red Bull after all, albeit for a very short while. By the time it was time for the race to start, the clouds had cleared up, and the grid was all set to start on slick tyres. 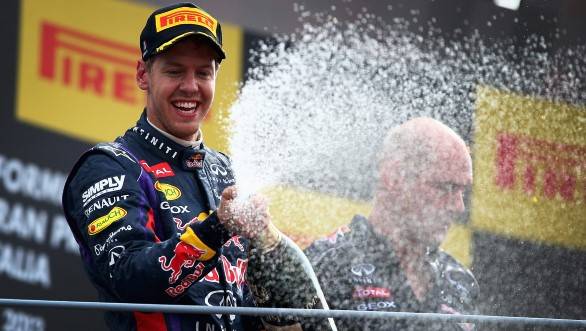 Sebastian Vettel takes his 32nd career win at Monza - champagne on the podium despite all the booing!

When the five red lights went out at Monza, Vettel was off into the distance, although, as he would later admit, he very nearly didn't clear the first corner, locking his front right, flatspotting the tyre along the way, and causing the team some amount of worry during the opening stint of the race. Behind him, Felipe Massa had got the better of Mark Webber and managed to get into second place. Webber held position for the next two laps, before Fernando Alonso staked his claim to third place, moving ahead of the Red Bull at the second chicane. With Webber down in fourth, it was Nico Hulkenberg who took up fifth position. The Sauber had started the race third on the grid, the team's best qualifying position all year, but Nico wasn't able to keep the Ferraris behind him. As things turned out, though, it wasn't all too bad - the Hulk would finish the race fifth too, giving Sauber their best finish of 2013.

Then, on lap 8, Alonso got past Massa. Was it a terrific overtaking manoeuvre? Not quite. But it was one of those overtaking moves that we've seen the Ferrari drivers make in the past as well, although without any messages being conveyed over the radio from Rob Smedley to the Brazilian driver. Five seconds separated Alonso from the leading car, while the battle for the third place then fell to Massa and Webber. It was Aussie Grit who would come out tops in that one - giving him his best finish at his last ever Italian Grand Prix.

The battles further down the grid proved to be more exciting. Romain Grosjean snatched eighth place from Jenson Button. Grosjean even got past Sergio Perez in a rather clean manner - no contact whatsoever, which is unusual given the drivers in question. Kimi Raikkonen (after having to pit for a new front wing at the end of lap 1 and then stopping on lap 30 again) found himself outside of the Top 10, battling with Lewis Hamilton. The Briton's tough weekend continued - not only was he knocked out at the end of Q2, but a slow puncture to his right rear, coupled with a faulty radio connection to the pitwall made life very tough indeed. The Iceman's race improved though, and he made his way past both McLarens of Perez and Jenson Button, although for once he had to cede a position to his team-mate.

The Red Bulls, meanwhile, had some cause for worry with gearbox woes. Both drivers had been instructed to short shift at certain parts of the track, but there didn't appear to be any real danger of them losing their positions. And so, after 53 laps at Monza, Sebastian Vettel crossed the chequered flag first, with Fernando Alonso bringing Ferrari fans some joy in second and Mark Webber finishing third.

Indeed it was three brave men who stood on the podium at Monza. Alonso, of course, had fought valiantly. Sebastian and Mark were brave because they had to, er, brave the boos and jeers of the angry tifosi. All in a day's racing, eh? But Vettel's sixth win of the season also proved to be the 32nd of his career, equalling Fernando Alonso's tally. The win also moved Vettel 53 points clear of Alonso in the championship hunt with a total of 222 points. Alonso is second with 169 points, while Lewis Hamilton, with 141 points is third.