Lewis Hamilton on pole and Nico Rosberg starting third on the grid. That the 2014 Australian Grand Prix was always going to be a Mercedes-dominated race was clear from the very beginning. The fact, though, that only one Mercedes would make it till the end of the race, though, wasn't something that we thought would happen. 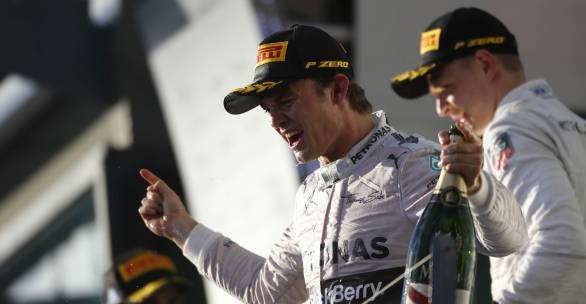 When the five red lights went out at Albert Park in Melbourne, it was pole man Hamilton who got off to a slow start, while team-mate Nico Rosberg came flying through from third to take the lead. Daniel Ricciardo who was second on the grid for Red Bull Racing came through the first corner managing to hold position, while McLaren rookie, Kevin Magnussen came through to take third place. Hamilton had slipped down the order to fourth, and on just the second lap of the race was asked to come into the pits because the team needed to save the engine. He stayed out on track for a couple of laps more before heading into the pits and into retirement by the end of the fourth lap.

There were other retirements that had already occurred though. Barreling into the first corner on the first lap, Caterham's Kamui Kobayashi clipped the back of Kimi Raikkonen's Ferrari and then barrelled right into the Williams of Felipe Massa. The Caterham and Williams both retired then and there, while Raikkonen managed to continue through the race. Sebastian Vettel who had qualified 13th and started the race 12th thanks to a grid penalty for Bottas fell back at the race start and retired by the end of the fourth lap.

During the early stages of the race, it was the other Williams that was making progress through the field. Valtteri Bottas really was the man on the move, picking up places lap after lap. After getting past the two Toro Rossos of Daniil Kvyat and Jean-Eric Vergne, Bottas even managed to muscle his way past Kimi Raikkonen. However, with his sights set firmly on fifth place man Fernando Alonso, who was in turn chasing down fourth-placed Nico Hulkenberg, Bottas managed to clip his right rear tyre on the wall. This resulted in a puncture and a trip to the garage for a new right rear.

The Safety Car situation that this caused was enough to ensure that Jenson Button leapfrogged the rest of the grid by moving to sixth place after having started tenth on the grid. When the race was restarted, the order up ahead didn't change. Rosberg led by a mile, with Ricciardo second and Magnussen third. Force India's Hulkenberg hung onto fourth, ahead of fifth-placed Alonso, Button in sixth and Vergne and Raikkonen seventh and eighth.

When the 57 laps of the Australian GP were over, it was Rosberg who had, by over 24 seconds, taken the 100th win for a Mercedes-powered car in Formula 1. Ricciardo became the first ever Australian on the podium at his home grand prix, while Magnussen became the first ever Danish driver to stand on the F1 rostrum. How's that for a historic podium at a historic race. The new era of F1. It might not have the best looking or best sounding cars, but gosh, the racing was good!