Reigning world champion, Lewis Hamilton certainly has gotten off to a good start in the 2015 season of Formula 1. Not only was he on pole at the first two races at Australia and Malaysia, all signs at the beginning of the Chinese Grand Prix weekend pointed to the fact that Hamilton was likely to take his third pole in a row in 2015. Which is exactly what happened. After dominating all three practice sessions, Hamilton stamped his authority on qualifying with a timing of 1min 35.782sec. Following him to second spot on the grid was his Mercedes AMG F1 team-mate, Nico Rosberg, with a timing of 1min 35.824sec. It was a valiant Rosberg who tried to do everything he could to take pole position away from his team-mate, but he fell short by a rather frustrating four-hundredths of a second. 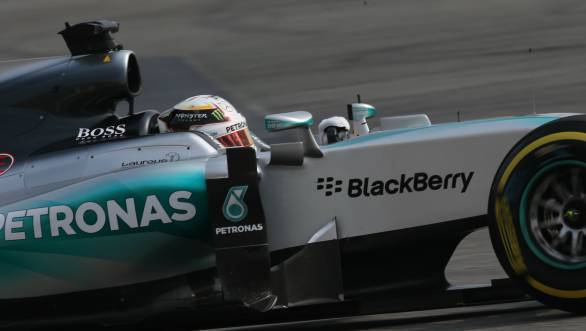 Lewis Hamilton takes his third consecutive pole of 2015, with top spot at Shanghai

It's the second and third row of the grid that are particularly interesting. Sebastian Vettel lines up third in his Ferrari, with the two Williams drivers Felipe Massa and Valtteri Bottas starting fourth and fifth. Vettel's team-mate Kimi Raikkonen takes sixth spot on the grid. And even though third on the grid does indicate that Vettel is the best of the rest, it doesn't change the fact that his timing was a full second down on Hamilton. Which means that a second win for Vettel might be tough.

Daniel Ricciardo managed to take the first of the Red Bulls to seventh on the grid. Something that the team, amidst Dietrich Mateschitz's continued insistence that the team might bow out of Formula 1 soon, must view with some amount of relief. Romain Grosjean put the first Lotus-Mercedes eighth on the grid, followed by the two Sauber Ferraris of Felipe Nasr and Marcus Ericsson, who rounded out the top 10.

Despite a brief glimmer of hope in Q2, McLaren drivers Jenson Button and Fernando Alonso could do no better than 17th and 18th on the grid, behind the two Force Indias of Sergio Perez and Nico Hulkenberg. Will Stevens and Roberto Merhi were 19th and 20th in the Manor Marussias.