If we were the Mercedes AMG F1 crew, we'd have been running for cover after the 2015 Monaco Grand Prix. That's just how palpable the tension in the air was on the podium at Monte Carlo. Lewis Hamilton stood third, silently seething about the pitstop gaffe that meant he lost out on the race win to team-mate Nico Rosberg. Ferrari driver Sebastian Vettel was all smiles having finished second. And Rosberg, having taken a third consecutive Monaco GP win, was understandably delighted. For the first 65 laps of the race, it seemed impossible that the race win would fall to anyone other than Hamilton. And then, as it so often happens in motor racing, things suddenly changed. 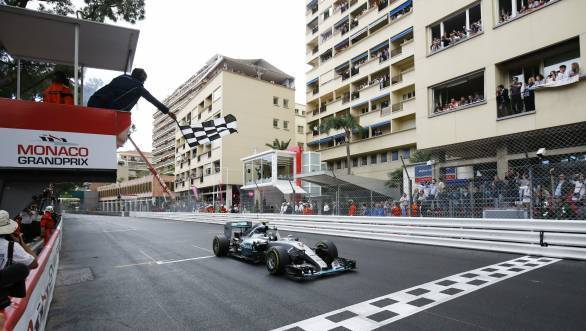 Let's rewind a little, though. When it comes to qualifying on the streets of Monte Carlo, it was Lewis Hamilton who took a fine pole position, his first ever in the principality. And when the five red lights went out on Sunday, it was Hamilton who was off to a very good start. At Monaco, it very often proves to be a race that plays nicely into the hands of the man on pole. And for the first 65 laps of the race, that is exactly what happened. Lewis Hamilton spent the race running away at the head of the order, with his team-mate chasing him down in second place, and Sebastian Vettel third.

Things weren't meant to be, though. Young Max Verstappen, who was working his way through the grid, came upon Romain Grosjean's Lotus F1 car. In trying to get past Grosjean, Verstappen clipped the Lotus and ended up in the barriers. A Safety Car was brought out while the debris from his Toro Rosso was being scooped up and cleared away. Several drivers filtered into the pitlane, trying to take advantage of the situation and get new tyres. Hamilton, in what was a surprising call from Mercedes, did so too. But was he able to make it back out of the pits in time to head off Rosberg and Vettel? No.

When the Safety Car went back in, it was Rosberg who lead the race till the chequered flag fell, with Vettel following home in second. Hamilton, as already described, was seething thanks to having the win robbed from him. There were other repurcussions of the crash between the Toro Rosso and the Lotus, the most significant being that Verstappen has earned himself a ten-place grid penalty at the upcoming Canadian GP.