When Ferrari arrived at Singapore with an upgrade to their engine, which saw them on par with Mercedes AMG F1 in terms of power, we knew that Formula 1's night race was going to be tremendously exciting. There were signs of it during qualifying when Vettel managed to take pole, with the Mercedes drivers down in fifth and sixth. The race itself, however, was proof. 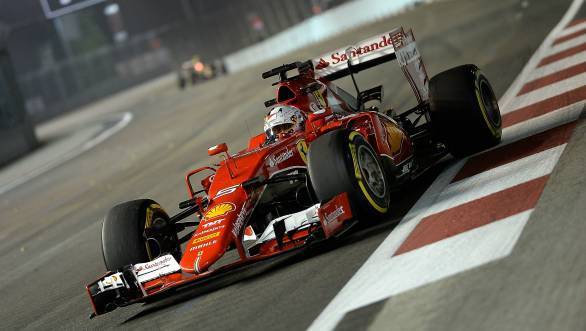 At the start of the race it was Sebastian Vettel at the head of the order, with Red Bull Racing's Daniel Ricciardo second and the other Ferrari of Kimi Raikkonen down in third. The order would remain exactly so all through the race. Of course, that might lead one to believe that the race lacked excitement, which isn't the case at all. Up and down the order there were battles raging, people sparring for position on track, Safety Car situations, and, at one point, a man sauntering down the track rather casually. Oh, it was a thriller of a race indeed.

But what stood out, perhaps, was the trouble that Mercedes appeared to be in. Before the race started, Niki Lauda had declared that the best that they could hope for from championship leader Lewis Hamilton was a third place finish. The team appeared to be struggling with tyre grip issues. While Hamilton ran for the most part of the race in fourth place, on lap 23 things went wrong for him. Even though he tried to continue driving for the next ten laps, he steadily dropped down the order with issues with the powertrain that eventually saw him 16th on track, and from there, into retirement.

Also impressive during the race was young Max Verstappen, who brought his Toro Rosso home in eighth place, one place ahead of his team-mate Carlos Sainz Jr. Although, towards the closing stages of the race, Verstappen was urged by the team to give back the place to his team-mate, an order that he appeared to disobey.

Other finishers were Marcus Ericsson for Sauber, Pastor Maldonado and Romain Grosjean who took twelfth and thirteenth for Lotus, while it was a fourteenth place finish for rookie driver Alexander Rossi in his F1 debut for the Manor-Ferrari team. He finished one place ahead of his team-mate Will Stevens.

In seven days' time, F1 heads to the Japanese Grand Prix. The championship battle is certainly on!