The 2015 Hungarian GP, the final race before Formula 1 breaks for Summer, was a treat. It was a departure from the Mercedes-only monotony that has become something of a norm since the beginning of the 2014 season. It was a race that ended in dramatic results and terrific amounts of racing action and unpredictability too. And it saw an unusual podium - Sebastian Vettel won the race taking his second win of the 2015 season, with Red Bull drivers Daniil Kvyat and Daniel Ricciardo taking the other two steps on the podium. The Mercedes pair of Lewis Hamilton and Nico Rosberg finished sixth and eighth respectively, within the points, but unhappily for them really not where they'd have liked to be. 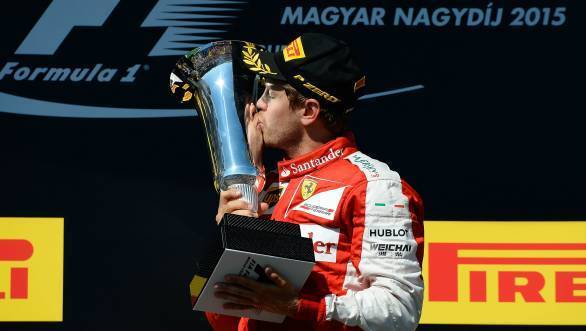 Second win of the 2015 season for Sebastian Vettel at Hungary

Even though it was Hamilton on pole, when the five red lights went out at the Hungaroring, Ferrari driver Vettel slipped past the cars ahead of him and took the lead. His team-mate Kimi Raikkonen who had started fifth, two places on the grid behind Vettel, also managed to make up positions, slotting into second place. Meanwhile, an off-track excursion on the first lap saw Hamilton drop to 10th on track, which meant that he wasn't a threat to the Ferraris. So it was that Vettel and Raikkonen found themselves at the head of the order, steadily increasing the gap to the chasing pack, led by the Mercedes of Rosberg. Steady progress had been made by Red Bull driver Daniel Ricciardo, who, after the first round of pitstops, found himself running fourth.

Meanwhile, an MGU-H defect on Raikkonen's car meant that the Ferrari was in trouble. The race got more dramatic even, when the Sahara Force India of Nico Hulkenberg had a dramatic front wing failure that resulted in the driver ending up in the barriers. Fortunately, on a weekend where tribute had been paid to the late Jules Bianchi, Hulkenberg walked away unhurt. The Safety Car was deployed, and the race leaders all dived into the pitlane. When the Safety Car went back into the pits, Vettel was safely at the front of the pack, with Raikkonen in his ailing Ferrari unable to prevent Rosberg from getting the better of him. Hamilton couldn't do anything to prevent a very aggressive Ricciardo from getting past him, and with the contact that ensued during the scuffle resulting in a damaged front wing, the Mercedes slowed down considerably. He then needed to pit for repairs and serve out a drive-thru penalty for the collision with Ricciardo.

While Vettel ran away at the head of the order, and Raikkonen retired, Ricciardo began putting pressure on Rosberg. They sparred for a while, before Ricciardo got passed Rosberg, his front wing causing a puncture in the Mercedes, as well as Rosberg's dreams of a podium. The fact that Ricciardo had to pit to chnge his front wing meant that his team-mate Kvyat came through to take second place, with the Honey Badger having to settle for third on the podium.