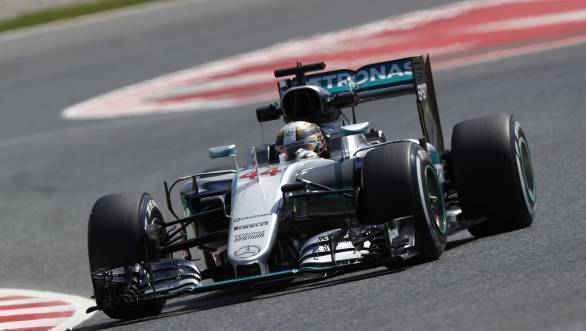 Lewis Hamilton took a fine pole position at the Spanish GP, blocking attempts from his team-mate Nico Rosberg to take the top spot on the grid. Behind the two Mercedes AMG F1 cars, starting on the second row of the grid, are the two Red Bull Racing cars. Daniel Ricciardo starts third, one place ahead of team-mate and Red Bull rookie Max Verstappen, the Dutchman just having been promoted from the Toro Rosso team.

While it didn't seem like Hamilton would be as fast as he was, the defending world champion managed to show some sign of his pace during Q2. Things didn't get easy during Q3, especially when he made an error during his first fast lap of the session. He then needed to put it all together in his final run - ending up with a timing of 1min 22.000sec. Given that it was more than two-tenths ahead of Rosberg, who had set a time of 1min 22.280sec, it was enough for Hamilton to grab pole.

Over in the Ferrari camp, there was some amount of trouble, with both Sebastian Vettel and Kimi Raikkonen unable to have trouble-free runs. This meant that Ferrari, who otherwise appeared confident of mounting a strong challenge to Mercedes, were only able to qualify behind the Red Bulls. Raikkonen set the fifth-fastest time, with Vettel sixth on the grid.

The best of the Williams made it to seventh on the grid, with Valtteri Bottas setting a time of 1min 23.522 sec. Carlos Sainz came next, taking his Toro Rosso to eighth on the grid. Then came the Force India of Sergio Perez in ninth, with Fernando Alonso rounding up the top 10, giving McLaren it's first Q3 appearance since 2014.

Further down the grid, Nico Hulkenberg could do no better than eleventh place, with the second McLaren of Jenson Button in twelfth place. It wasn't the best showing for Daniil Kvyat who made his return to the Toro Rosso team, after the somewhat controversial demotion from Red Bull Racing. The Russian driver finished thirteenth.

Romain Grosjean qualified 14th, with Kevin Magnussen 15th in the Renault, and Esteban Gutierrez 16th in the second Haas. Behind, in 17th was the second Renault of Jolyon Palmer, with Felipe Massa down in 18th after an error in Q1 saw him bumped out of the way. Marcus Ericsson, Felipe Nasr, Pascal Wehrlein and Rio Haryanto took the final places on the grid for the Sauber and Manor teams.