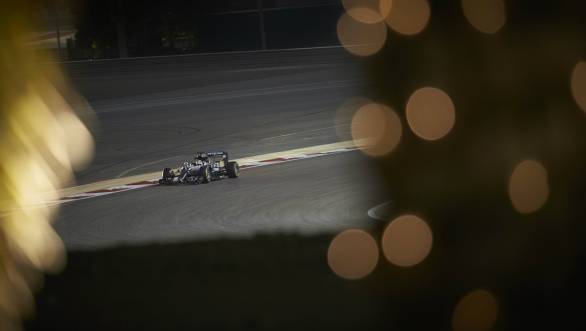 It's the second Formula 1 weekend of 2016, and the atmosphere in Bahrain seemed rather similar to that at the season-opening Australian GP. Not only was there an undertone of discontent about the rolling elimination style of qualifying, there was also the fact that for the second race in a row, Lewis Hamilton took pole position. It was his 51st F1 pole position, one that he took in lap record smashing style, clocking a time of 1min 29.493sec.

Starting tomorrow's race second on the grid is Hamilton's Mercedes AMG F1 team-mate Nico Rosberg. The German driver looked strong all through qualifying, and even looked like he would be on pole, before Hamilton snatched it away from him by less than a tenth of a second.

Third place on the grid goes to Ferrari driver Sebastian Vettel, who declared that the car is shaping up exactly how the team had hoped it would, which means they will hopefully take the challenge to the Mercedes drivers over the course of the 2016 season. Lining up alongside Vettel is his team-mate Kimi Raikkonen. While Daniel Ricciardo is fifth for Red Bull, followed by the two Williams drivers Valtteri Bottas and Felipe Massa. Nico Hulkenberg, in the first of the Sahara Force Indias, will start eighth on the grid.

The highlight of Q2 was the fact that Stoffel Vandoorne, on his grand prix debut, as he replaces the injured Fernando Alonso at McLaren, managed to outqualify Jenson Button. Vandoorne will start his first F1 race 12th, while his more experienced team-mate, 2009 world champion, Button, will start 14th. Romain Grosjean will start tomorrow's race 9th, in the first of the Haas F1 cars, with the Toro Rosso pair - Max Verstappen and Carlos Sainz Jr - tenth and eleventh. Esteban Gutierrez put the second Haas F1 13th, while it was a tough Q2 for Daniil Kvyat who, after being knocked out, will start the 2016 Bahrain GP 14th on the grid.

The lot of drivers who were eliminated in Q1 will start in the following order: Pascal Wehrlein 16th for the Manor Racing Team, Marcus Ericsson 17th for Sauber, Sergio Perez 18th for Force India (in what is the team's worst qualifying position at Bahrain in 10 years), Kevin Magnussen 19th in the first of the Renaults, followed by his team-mate Jolyon Palmer. Rio Haryanto in the second MRT car will start 21st, while Felipe Nasr will start 22nd.