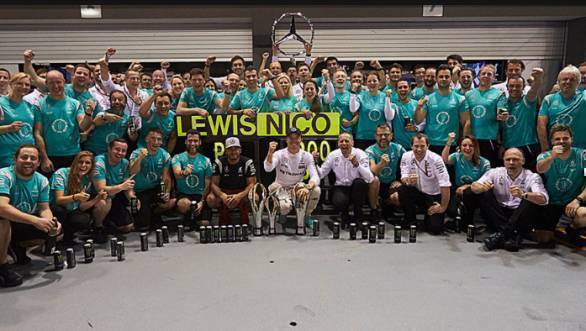 Lewis Hamilton, Nico Rosberg and the Mercedes AMG F1 team celebrate their 1-2 finish at the 2016 US GP

Lewis Hamilton's win at the 2016 US GP at the Circuit of the Americas has helped him keep alive his hopes of a third straight driver's championship title for Mercedes, and his fourth title overall. The British driver took a fine lights-to-flag win, and the 25 points that this win earned him have helped dent the lead that his team-mate Nico Rosberg has in the championship standings. After the US GP, Rosberg now leads with 331 points, while Hamilton, with 305 points is merely 26 points adrift. There are three races still to go in the 2016 season.

Meanwhile, Rosberg had to settle for second place at Austin. The German driver had a tricky start to the race, finding himself under pressure from Red Bull Racing's Daniel Ricciardo during the first lap. It was Ricciardo who came off better, managing to squeeze past Rosberg, settling into second place. But Hamilton had the advantage over the chasing Red Bull, managing to control the pace of the race. Meanwhile, Rosberg was the one in pursuit of Ricciardo.

The race then got tricky for Red Bull. Max Verstappen made an unexpected trip into the pit-lane, believing that he'd been called into the pits, which he would later apologise for. Three laps later his car suffered a gearbox problem, which would mean an early retirement for the Dutchman, and a Virtual Safety Car period while his car was being removed.

This VSC period saw Rosberg pit, emerging from the pit-lane ahead of Verstappen's team-mate, Ricciardo. Try as he did, though, there was simply no catching his own team-mate Hamilton. The British driver, who last won a race back in July this year (the German GP to be precise) would take victory by 4.5 seconds over Rosberg. Daniel Ricciardo took third place.

Finishing fourth was Sebastian Vettel in his Ferrari. The four-time world champion was the only Ferrari driver to finish, with his team-mate Kimi Raikkonen's race ending in retirement after his rear right wheel was attached incorrectly during the third pit-stop.

One of the race's highlights was the battle between Carlos Sainz Jr and Fernando Alonso. Ultimately it was the more experienced double world champion who took fifth place for McLaren, while Sainz Jr had to settle for sixth place for Toro Rosso. Felipe Massa took seventh spot for Williams, with the lone surviving Force India of Sergio Perez finishing eighth. Perez's team-mate Nico Hulkenberg had his hopes of a good result at the US GP dashed when he tangled with Valtteri Bottas on the opening lap of the race, the resulting contact sending him into retirement. Jenson Button gave McLaren a double points finish, with ninth place. While Renault's Romain Grosjean ended the race in 10th place, claiming the last point of the weekend.