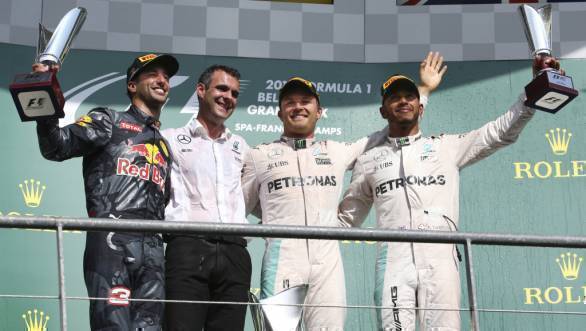 Nico Rosberg returned to the top step of the podium, winning the first race after the summer break, the 2016 Belgian Grand Prix at Spa-Francorchamps. Second place in the race went to Red Bull Racing's Daniel Ricciardo, while Nico's Mercedes AMG F1 team-mate Lewis Hamilton took third place after starting 21st on the grid. This ensured that the Briton, who is currently leading the F1 world championship, was able to maintain his lead at the head of the order.

While Rosberg was able to move from pole position to race lead during the early stages of the race, there was chaos behind him. Max Verstappen, who had qualified second on the grid, collided with the Ferrari's of Kimi Raikkonen and Sebastian Vettel at the start of the race. Vettel, whose Ferrari SF16-H sustained the most damage, needed to pit on lap one of the race.

Further behind Jenson Button in his McLaren MP4-31 and Pascal Wehrlein in the Manor F1 collided, resulting in both cars being eliminated on the first lap. Carlos Sainz Jr was also eliminated soon after, when a tyre on his Toro Rosso blew on lap 2 of the race. The biggest incident was when Kevin Magnussen lost control of his Renault on the sixth lap, ending up in the barriers. Magnussen, fortunately escaped with only an ankle injury. The race was redflagged, and proper racing resumed on the eleventh lap of the race.

The one person who benefited from the red flag situation, was Hamilton. Having started 21st, the Mercedes driver was running in fifth place on the ninth lap. When the rest of the field decided to pit, it meant that Hamilton managed to restart the race in a far better position than he might have been in otherwise. 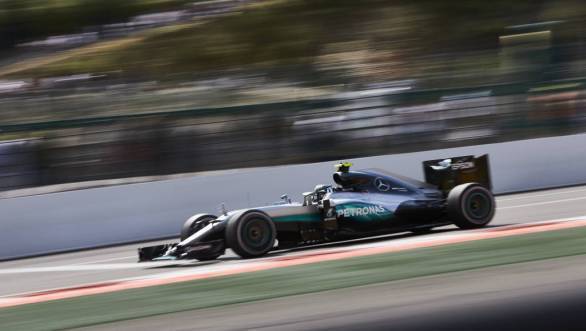 The restart saw Rosberg getaway safely, with Ricciardo chasing him in second and Nico Hulkenberg fighting for third place. While Rosberg would maintain his lead at the head of the order, even extending it to 14.1sec over Ricciardo by the end of the race, Hamilton was the man on the move. He managed to make it past Fernando Alonso when the race restarted, and then got past the Force India to finally take third place.

Hulkenberg had to stay content with fourth place, his best ever F1 result, while Sergio Perez took fifth place, which ensured Force India moved ahead of Williams, taking fourth in the constructors championship. Vettel finished sixth, Alonso seventh, while Valtteri Bottas put the first of the Williams in eighth place. Raikkonen finished ninth for Ferrari, while Felipe Massa took tenth place in the second Williams.

Max Verstappen, could do no better than 11th place, after a race filled with incidents for the Dutchman.