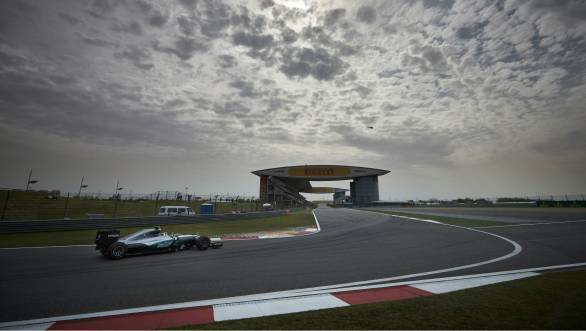 Of the two races that have been held in 2016, Nico Rosberg has won both, ensuring he leads the F1 championship standings early on in the season. There's now a distinct possibility that he might increase his lead in the championship standings at the Chinese GP. Rosberg has put himself in the perfect position to win the race, scoring pole during qualifying in Shanghai.

Well, Rosberg's run to the head of the grid was made somewhat easier by the fact that his team-mate Lewis Hamilton would start five places lower than his qualifying position, after receiving a penalty for a gearbox change. Making things worse for the defending World Champion was the fact that the Mercedes team discovered an ERS issue on Hamilton's W07 Hybrid. Even though they tried to fix this during Q1, it wasn't possible. The result? Hammy starts dead last on the grid.

That left the battle for pole down to Rosberg and the two Ferraris of Sebastian Vettel and Kimi Raikkonen. While Raikkonen managed to put in a very fast lap during Q3 to take provisional pole, Rosberg came back with an even better lap, clocking a time of 1min 35.402s. Kimi's attempt at another flying lap didn't go too well, with the Finn running wide at the hairpin. Vettel didn't manage to set a particularly fast lap either.

And the failure of the Ferraris worked very well for the Red Bull Racing team. Daniel Ricciardo managed to put his RB12 second on the grid, ahead of Raikkonen, with Vettel fourth on the grid.

The third row of the grid sees Valtteri Bottas fifth, with the other Red Bull of Daniil Kvyat sixth. The fourth row sees the first of the Force Indias, with Sergio Perez seventh, while Carlos Sainz Jr. qualified eighth for Toro Rosso. This was one spot ahead of his team-mate Max Verstappen in ninth, with Nico Hulkenberg rounding off the top 10. However, a penalty for the Force India driver, after a wheel came loose from his car during Q2, has resulted in a three-place grid penalty, which elevates Felipe Massa to 10th on the grid.