Victory at a wet Singapore Grand Prix - F1's first ever wet night race - helped Lewis Hamilton increase his lead at the head of the championship standings, to 28 points. This, as championship rival, Ferrari's Sebastian Vettel, crashed out of the race early on. Hamilton was able to get away cleanly, not affected by the chaos around him on the first lap, and subsequently held the lead all through the race. 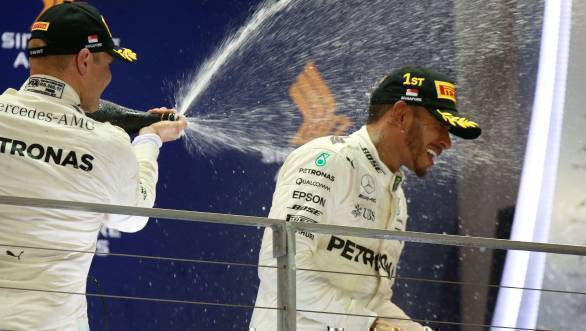 Vettel, who has four Singapore GP wins to his name, wasn't able to challenge for a fifth win at the track. The German driver ended up in a controversial collision with his Ferrari team-mate Kimi Raikkonen and Red Bull Racing's Max Verstappen at Turn 1. While Raikkonen and Verstappen were immediately out of the race, Vettel attempted to make it back to the pits, however with damage already done to his SF70H, he spun on track.

Away from the mayhem, Hamilton led, with Red Bull's Daniel Ricciardo second, and Nico Hulkenberg sitting in third place in his Renault. The safety car was then sent out in order for the debris to be cleared up, while Hamilton was able to increase his lead significantly. Ricciardo, also on intermediate tyres much like the Mercedes AMG F1 ahead of him, continued in second place.

All of the hard work put in by Lewis went down the drain when Daniil Kvyat crashed out in his Toro Rosso, necessitating another safety car period. Red Bull brought Ricciardo in for new tyres, also intermediates, and Mercedes left Hamilton out. There was some amount of worry in the Mercedes camp when Ricciardo imediately came back out on track and took back second place when Nico Hulkenberg pitted. 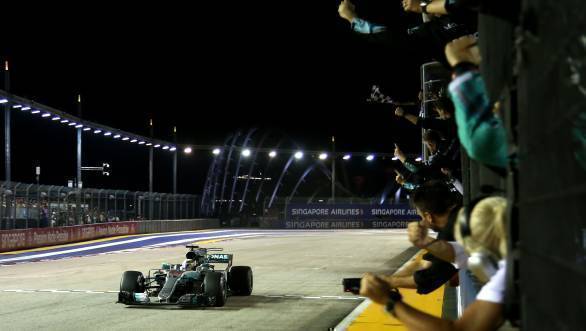 But when the safety car returned to the pits and racing was back on, Hamilton opened up a gap to Ricciardo, even as the track dried up. Red Bull brought their driver in once again at the end of the 28th lap, and Ricciardo was sent back out on ultra-soft tyres. The stop was a slow one, and Hamilton, after his own stop for tyres, still had a decent lead over his rival.

There was soon a third safety car situation, this time cause by the spinning Sauber of Marcus Ericsson, that nullified the lead of 10 seconds that Hamilton had built up. When the safety car went back in, Hamilton, after some discussion with the Mercedes team, was allowed to get his head down and once again open up the gap to the chasing Red Bull.

At the end of the race, Hamilton would cross the chequered flag 4.5 seconds ahead of Ricciardo, with Mercedes' Valtteri Bottas taking third place in the championship. While Hamilton has now extended his lead in the championship to 28 points over Vettel, Bottas has aided Mercedes to a 40-point lead over Ferrari in the constructor's championship.

Finishing fourth in the race was Carlos Sainz Jr., who took his best-ever finish in F1. Sixth place went to Jolyon Palmer, the driver that Sainz will replace at Renault next year, also a career-best finish. Sergio Perez aided Force India to a fifth place finish.