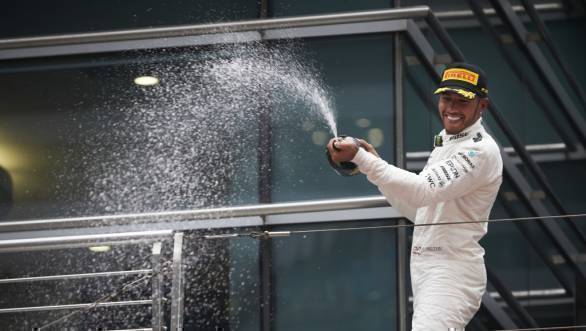 Lewis Hamilton took victory at the Chinese Grand Prix, his fifth win at Shanghai. The British driver managed to drive a perfect race, to take his very first win of the year. Meanwhile, Sebastian Vettel, who won the season-opening race for Ferrari at Melbourne, finished second in China. This means that Vettel and Hamilton are both tied on points ahead of the Bahrain GP. The drive of the race belonged to Max Verstappen. The Dutch driver drove brilliantly to move from 16th on the grid to third place.

When the race started, given that the rain had eased up, most drivers started out on intermediate tyres. Hamilton managed to lead from pole on the first lap, while Vettel (who was investigated for the possibility that starting to one side of his grid slot gave him an advantage and later cleared) had to keep the second Mercedes of Valtteri Bottas behind him.

When an incident between Lance Stroll and Sergio Perez that ultimately put the Williams driver out of the race, caused a Virtual Safety Car period, drivers began pitting for slicks. However both Vettel and Hamilton stayed out on track on intermediates.

Then came the Safety Car, after Antonio Giovinazzi crashed on the main straight. Which meant that Hamilton pitted for soft tyres but still retained his lead, while Daniel Ricciardo moved into second, ahead of Kimi Raikkonen and Max Verstappen. While Verstappen then began climbing up the order, Vettel was stuck in fifth for a while. But he soon managed to move past his Ferrari team-mate, and then Ricciardo. Eventually Vettel caught up with Verstappen and moved into second place. After the final round of pitstops though, Hamilton, Vettel and Verstappen came out in that order, which is where they finished the race.