Valtteri Bottas took his second Formula 1 victory at the Austrian GP. The Finnish driver had qualified on pole, and led the race from lights to flag. He beat out Ferrari's Sebastian Vettel, who took second place on the podium, while Red Bull Racing's Daniel Ricciardo took third place. 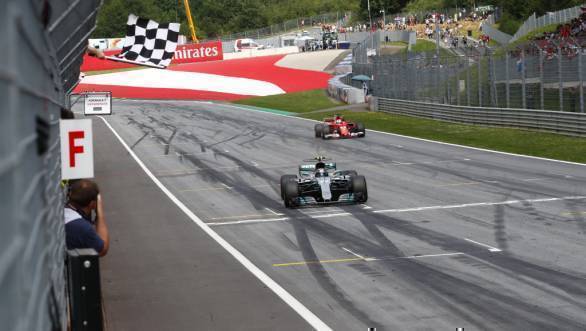 Valtteri Bottas crossed the chequered flag first at the 2017 Austrian GP, with Sebastian Vettel just behind him in second place.

Bottas got off to a good start when the five red lights went out at the track. Some would say it was too good a start, since really slowed down videos of the start show that the car was already moving before the lights went out. Either way, he took off at the head of the order, with Ferrari driver Vettel in hot pursuit. His first stint in the race was fairly calm, with Bottas at the head of the pack. At the start though, there was chaos behind, with Max Verstappen (much to the dismay of the many Dutch fans who filled the grandstands at the Red Bull Ring) getting punted out in a clash between Toro Rosso's Daniil Kvyat and McLaren's Fernando Alonso (with the Spaniard also facing an early end to his race). 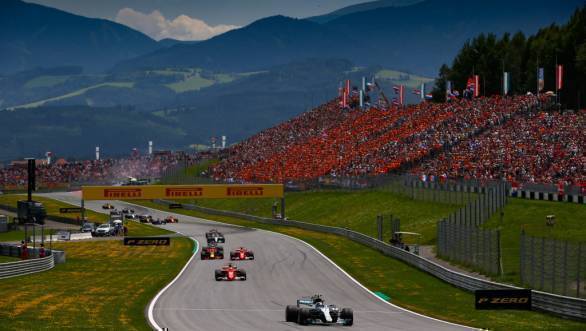 Bottas leading the pack at the 2017 Austrian GP

Bottas was able to pull out a lead over the chasing Ferrari by eight seconds. Meanwhile Hamilton, who started eighth on the grid, made his way up the order and was already up in fifth position. It was the other Ferrari driver Kimi Raikkonen who came under attack from Hamilton as he began to hunt down fourth position. Mercedes would bring him in early for a switch to ultra-softs that they hoped would last till the end of the race.

Vettel and Ricciardo both stopped soon after. While Bottas was out on track, Vettel was able to chip away at the gap. Seven laps later the Finn was called into the pits by Mercedes, by which time Vettel had narrowed the gap down considerably. Then Bottas began to lose time when his left-rear tyre started to develop a blister on it. Indeed, by the end of the race there was a mere 0.6 seconds that separated Bottas and Vettel, which led the German driver to believe that he could have won the race had there been a couple of more laps to go. 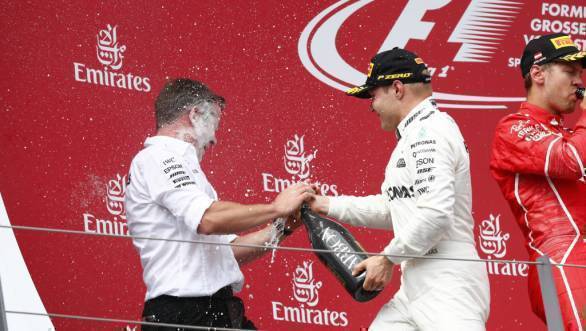 Valtteri Bottas celebrates his win at the 2017 Austrian GP

The win in Austria is Bottas' second victory in F1, with the first coming earlier this year at the Russian GP. Second-placed Vettel was able to extend his lead in the championship to 171 points, a full 20 points ahead of Lewis Hamilton who now has 151 points. Hamilton finished the race fourth behind Ricciardo. Third place in the championship standings is currently occupied by Bottas who has 136 points.