Sebastian Vettel will not receive any further penalty for his clash with Lewis Hamilton at the recently concluded Azerbaijan Grand Prix. The FIA met in Paris to discuss the incident, where Ferrari driver Vettel pulled up alongside Hamilton in the Mercedes AMG F1 and then rammed into him. During the race the German driver received a 10-second stop-go penalty, as well as had three penalty points added to his FIA Super License.

The FIA meeting was held to decide whether or not Vettel needed any further punishment for the incident, and the ruling that has been made says that he doesn't. 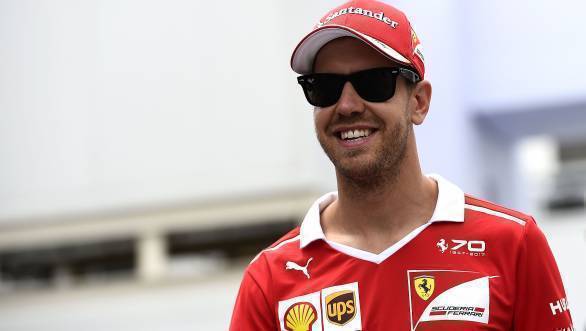 Sebastian Vettel is all smiles ahead of the Baku GP. Long before the angry incident between him and Mercedes driver Lewis Hamilton.

The FIA deemed that Vettel had sincerely apologised for his behaviour, which when coupled with the fact that he is committing to 'educational activities' in motorsport over the next year, results in the matter being dismissed.

The FIA statement said, "Sebastian Vettel extended his sincere apologies to the FIA and the wider motor sport family. He additionally committed to devote personal time over the next 12 months to educational activities across a variety of FIA championships and events, including in the FIA Formula 2 Championship, the FIA Formula 3 European Championship, at an FIA Formula 4 Championship to be defined and at the FIA Stewards' seminar. Due to this incident, President Jean Todt instructed that no road safety activities should be endorsed by Sebastian Vettel until the end of this year."

The statement also said, "Nevertheless, in noting the severity of the offence and its potential negative consequences, FIA President Todt made it clear that should there be any repetition of such behaviour, the matter would immediately be referred to the FIA International Tribunal for further investigation."

This is the second time in nine months that Vettel has been in the spotlight for his behaviour. The last incident occurred at the 2016 Mexican Grand Prix where he spouted a series of expletives against Race Director Charlie Whiting after the last lap of the race. Back then Vettel apologised to Whiting, and no action was taken.

The FIA, however, has come under severe criticism for their ruling, with many believing that the weak action against Vettel sets a dangerous precedent for future incidents that may take place in not only F1, but other classes of motorsport.